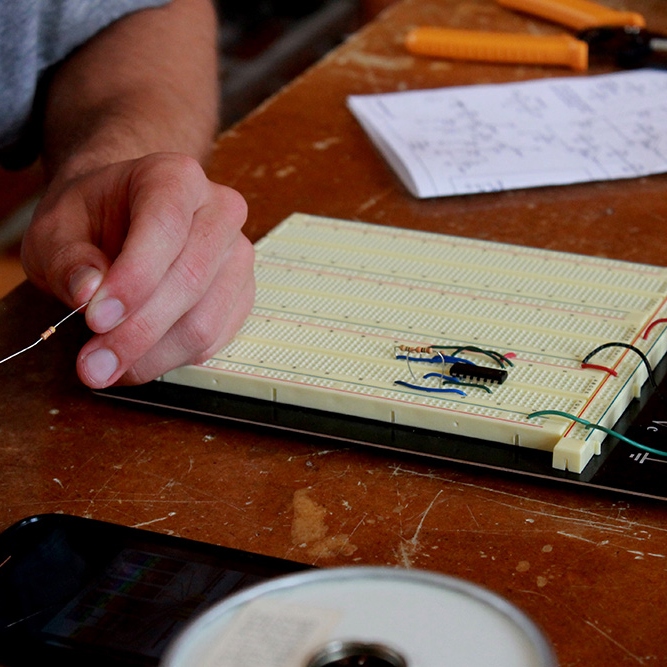 By Lillian Boatwright
In the basement of Holtzendorf Hall on the Clemson campus, there is a lot of noise. Dr. William Park, associate professor of electrical engineering, and his team of nine students create the clamor while working on a project that will take them through the process of designing, building and mass-producing synthesizers.

“I have been interested in music since I began to learn piano when I was five years old,” Park said. “I began building electronic ‘doohickeys’ from kits when I was about twelve [and] I began building my first synthesizer from scratch—work which I eventually turned into my master’s project.”

Students working with Park come from a range of interests and experience, which are similar to his own. Walker Hagan, a freshman bioengineering major, is also interested in the correlation between music and science.

“Music is a hobby of mine so analyzing the theory of sound and the physics behind it all is interesting, especially when I can manipulate it through a keyboard. Simply listening to the sounds we can create with manipulations of voltages astounds me,” Hagan said. Mary Lawrence Thomson, a sophomore electrical engineering major agrees.

“I am a music minor, so it has been a really great way for me to combine my major with one of my other interests.”

Park describes the project as an ongoing attempt to deepen students’ knowledge in musical instruments and the engineering behind them. The goal of the project is to give students the opportunity to use hands-on experiences to learn about the mass-production of synthesizers, which are electronic musical instruments used to produce a wide variety of sounds. They are often controlled by a keyboard, which is how Park and his students control their machine. Park also hopes to illustrate the overall design process—from concept to marketable product—to his students by allowing them to learn various tools and techniques in the design and construction of electronic circuits and user interfaces.

The beginning of the process involves designing and building circuit boards that control one aspect of the instrument. Students use trial-and-error to fine-tune their circuits and then move on to larger, more complex boards that will come together in one machine to control all functions and sounds. Engineering is not the only part involved in building these synthesizers; each instrument’s exterior appearance also plays an important role.
“From the standpoint of usability, a logical panel design is probably more important than pure aesthetics, but making it attractive does help to market a product,” Park said. “It not only sounds cool, it looks cool!”

As Park and his team continue working and learning, they will have first-hand experience that will eventually lead to the construction of the final synthesizer. The hands-on approach of the project has become an important way for students to practice what they learn in the classroom.

“I’ve learned more in this Creative Inquiry than in my electrical engineering coursework, so it has definitely helped me understand the practical sense of engineering,” Hagan said.

Most of all Park is happy to see his students having fun. “Essentially every student had the same reaction when they successfully hooked their first simple circuits up to the [test synthesizer], ‘That’s really cool!’”

Pedaling Towards a Healthier Lifestyle
Scroll to top