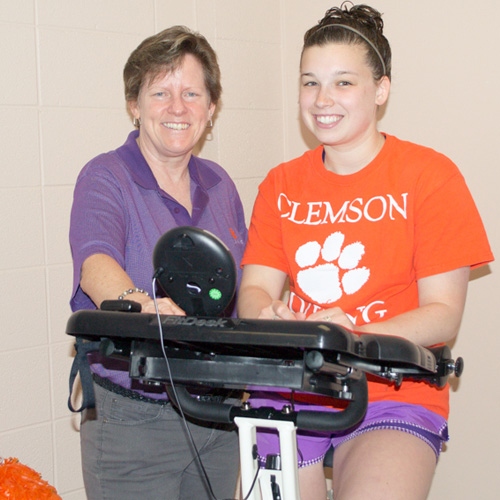 By Alyssa Glazener
The seat is not very comfortable, but it feels sturdy. It’s strange, at first, to be astride what looks like an exercise bike and not break a sweat. For Dr. June Pilcher, professor of psychology, and her Creative Inquiry team however, using the low intensity FitDesk bike has become a frequent habit. “The real effect is in the long term and in general fitness and how that impacts your ability to learn and work and think,” psychology junior Phil Smith said.

“It’s a stationary bike with a desktop. They’re affordable. They’re amazingly sturdy,” Pilcher said. A FitDesk allows its user to be active while working. However, its purpose is not to burn calories. Rather, the team believes that using the FitDesk increases focus and attention. “I think that the movement, not only does it make me feel more positive when I’m doing something that I know I need to do. It makes me more attentive while I’m doing it, it makes me more focused while I’m doing it,” Pilcher said, who hops on her FitDesk several times a day to read short scientific articles or emails.

According to Pilcher, this effect occurs because the body is partially in motion. Walking-like movement from the legs signals the brain to be alert. Normally, the brain would need to scan the horizon and avoid obstacles. Since the upper body is still, the brain is more relaxed. This combination prompts the brain to a level of alertness ideal for focusing on a task like reading a book.

Pilcher believes that the human body is meant to be in frequent, low-level motion. For example, ancient hunters and gatherers walked all day in search of food. While the modern concept of exercise, ninety minutes of intense calorie burning at the gym, is healthy, it does not give us the full benefits of frequent, low-level motion.
The eleven undergraduate psychology students in the Creative Inquiry began the project in the fall of 2013. First, they became familiar with previous research on the positive effects of exercise and assembled the fifteen FitDesks that are now on campus for anyone to use.“We’ve thought about looking at the correlation between GPA and how often someone uses the bikes,” Smith said.

“I’m always looking for a more efficient way to study,” Smith said. To him, the most interesting benefit of the FitDesk is how it may increase the speed and retention rate of reading study materials.

“It’s doing your own work but realizing that your own work is not the only thing that is going on, and that you can’t even do all of your own work by yourself. You have to bring in the rest of the team… It’s a really good way to realize that you do have peers, almost colleagues, transitioning into that,” Smith said.

“Try it out and see what you think,” Pilcher invited.

Literature as a Lens
Scroll to top