Preliminary Patterns In Spatial Ecology On The Non-coastal Pinesnake

Understanding how an animal spatially and temporally uses an environment can contribute to landscape level decisions in on-the-ground management, especially when such species are considered as rare, threatened, or endangered (RTE). Eastern Pinesnakes represent a group of increasingly rare, threatened, and disjunct populations historically ranging across much of the US east coast. Of the three putatively recognized subspecies, non-coastal members of the Northern Pinesnake Pituophis melanoleucus melanoleucus remain largely unstudied. We investigated the summer-seasonal movement patterns and estimated home range sizes of 2 adult Pinesnakes located on a high conservation priority fire-managed recreational forest in northeast Georgia, USA, during June and July of 2020. Our preliminary data suggests that even in the peak of Summer heat, male activity ranges are greater than those of females. We also report evidence on the nest site selection of 1 female Pinesnake, which accounts for the first documented record near the Blue Ridge ecoregion. Continued monitoring of these snakes and the addition of new individuals to this pilot study will assist federal and state agencies in the future management of this biodiverse land tract.

Non-coastal Northern Pine Snakes are rarely observed despite their robust size (i.e., >1.8m), loud defensive evolutionary adaptation (i.e., the epiglottal keel), and wide distribution (i.e., northern GA through KY and WV). Few vouchered reports exist across northeast GA and northwest SC, most of which predate the 1980’s. While three currently recognized members of the Eastern Pine Snake group have either been listed as federally threatened or placed on the list to receive a full species status assessment, Non-coastal Northern Pine Snakes have received almost no attention concerning even the most basic of ecological understandings. Based on the few existing reports on Pine Snake home range sizes, and the growing level of on-the-ground forest management occurring on the Chattahoochee National Forest, we sought to address a component of the spatial ecology behind one of eastern North America’s rarest vertebrate animals.

Specifically, we chose to report preliminary data on the home range sizes of adult Pine Snakes in the hopes of:

1) contributing to future forest management practices in a large protected block of land,

2) uncovering possible patterns of seasonal avoidance or co-occurrence, and 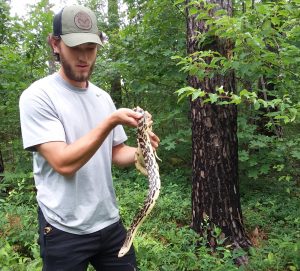 Capture and Radio Telemetry: A single adult male and female were both captured opportunistically. The male was captured while crossing a road in July of 2019, while the female was discovered basking next to the male in late May of 2020. Both snakes were surgically implanted with radio transmitters following a modified protocol from Reinert and Cundall (1982) by project partners at the University of Georgia’s School of Veterinary Medicine. The VHF transmitters (i.e., ATS model R1680 and Holohil Systems Ltd model SB-2) did not exceed 3% body weight of either snake. After a 48-72 hour recovery period, each snake was released at the point of capture. We attempted to pinpoint (i.e., <1m accuracy) each snake once per day from early June through 7 August, 2020 by using a Communication Specialists handheld receiver and an ATS 3 element folding yagi antenna. We recorded each location with a handheld Garmin GPS model 62s (3m accuracy). Home range Estimation: We estimated summer seasonal home range sizes by using (5) methods based on a fixed kernel utilization distribution and a bandwidth generated from the R packages ks (i.e., unconstrained reference, unconstrained plug-in, Unconstrained Likelihood cross-validation) and adehabitatHR (i.e., 100% MCP, “standard” reference similar to that from adehabitatHR). We used a modified function from Fieberg (2014) in the R statistical environment version 3.6.2 (2019) to perform all analyses.

We tracked the adult male from 3 May to 7 August, 2020 and the adult female from 17 June to 7 August, 2020. We constrained our dataset to  better represent the sampling distribution of the female by dropping all locations prior to 2 June for the male. In total, we used 53 locations for the male and 42 locations for the female. Home range estimates were similar among snakes and method (Table 1). The 95% isopleth from the unconstrained reference bandwidth appeared to best fit the point distribution for the male (HR=86.96 ha, Figure 1), while the female was best represented by the unconstrained plug-in (HR=76.69 ha, Figure 2). MCP estimates were greater for the male than for the female (55.62ha and 51.20ha, respectively), and showed little overlap (Figure 3). 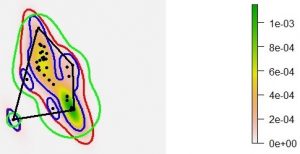 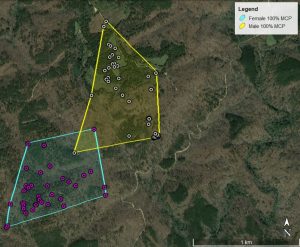 Our results of the 2020 summer-seasonal home range sizes for 2 adult non-coastal Pine Snakes are preliminary at best, but do offer meaningful pilot data considering only 1 previous investigation has occurred (Gerald et al. 2006). We evaluated 5 methods for generating home range isopleths during a relatively short period of time (~8-10 weeks) when regional annual temperatures are typically highest (i.e., June-August). While the hottest season of the year often reduces or temporally shifts squamate activity (DeGregorio et al. 2016), other studies have found seasonal reliance on differing habitat types during this time (e.g., large foraging movements, see Bauder et al. 2016). Due to a small sample size, we were restricted to drawing inference from visual inspection of the point distribution in relation to each unique isopleth. We excluded the Unconstrained Least-squares cross-validation bandwidth estimation due to 1) a lack of convergence to a total probability of 1.0 in the male, 2) the fact that highly clustered polygons likely offer little insight into additional management questions such as corridors for movement among areas of highest use intensity, and 3) Hlscv has been shown to perform poorly with herpetofaunal data (Figure 4). The best estimate for the male (86.96ha, Hns bandwidth) was 10.27ha larger than that of the female (76.69ha, Hpi); a sex biased pattern recognized across many temperate North American squamates.

Future management: Gerald et al. (2006) found an average annual fixed kernel 95% estimate of 59.9ha, a considerably lower estimate than that of our 2 snakes. This could be due to the the seemingly reduced availability of early successional habitat across our study site, potentially forcing our snakes to make routinely larger moves. Based on this as well as the 4th order microhabitat observations made in our study (unreported here), our results might indicate a limit in suitable habitat across our study area. We suggest the continued push for early successional promotion via selective thinning and prescribed fire paired with pre and post treatment telemetry. Interestingly, the female was never observed in or immediately adjacent to open field or edge habitat while the male frequented such sites (Figure 3).

Overlap or outliers: Our sampling period was after primary breeding activity is thought to occur, and before the peak in Autumn movement picks up. The limited overlap observed came from a single point from both snakes, possibly suggesting that sexes demonstrate minimal overlap outside of the breeding season. Given that our snakes were found together in late May, an argument is strengthened suggesting Summer-seasonal differences exist between the sexes (i.e., the male could have followed the female).

Nesting habitat: We also report on the nest site selection of the female; an unexplored portion of non-coastal Pine Snake biology. She was observed on 17 June as gravid in the mid day, and then found on 18 June during mid day and appeared to be postpartum. She was in a pine stump which was 100% rotten excluding a small ring of ground level bark. The site had a slight northeasterly aspect, and was within a strip of industrial pine which appeared to have experienced a fire. The ground cover was predominately pine straw with minimal herbaceous vegetation within a 3m radius. Although we did not excavate the eggs, it seems unlikely that she nested elsewhere given the short time lapse between locations.

We would like to thank the Creative Inquiry program for offering such a wonderful student based opportunity, the USFS, GA DNR, the USFWS, and Zoo Atlanta for providing funding, Camp Mikell for providing lodging, and Dr. Javan Bauder for assistance with spatial analyses.

Developing Online Platforms for Homework and Testing in Ecology