Landslide hazards maps have been created for several counties in North Carolina in response to several high profile slope failures in that state, some of those slope failures resulted in fatalities and extensive damage to property. Using their model and working closely with the NC Geological Survey, we are developing a landslide hazard for the most northerly section of Greenville County where steep slopes associated with the Blue Ridge escarpment exist.

In order to create this hazard map, it was necessary to acquire several requisite skill sets.  A good part of the summer was spent learning how to input and display digital data into a Geographic Information System (GIS). The software used to create the hazard rankings and map, called SINMAP, is a complicated program that requires both GIS skills and knowledge of the mechanisms and inputs that control slope failures. Those requisite skills were acquired during this past summer.

The goal of this research is to create a Geographic Information System (GIS) based landslide hazard map that can be made available to land managers in the upstate of SC.  The study area is the mountainous region in northern Greenville County, SC that includes Jones Gap State Park and Caesars Head State Park. This area currently lacks any hazard mapping excluding FEMA Flood Zones. The landslide hazard map will be constructed using the GIS based Stability Index Map (SINMAP) program.  Four counties in North Carolina have previously been mapped for slope failure potential by the North Carolina Geological Survey. These hazard maps are designed to prevent and minimize damage to local communities. Soil cores collected at Jones Gap and Caesars Head will be used to determine soil properties and shear strength.  Combined with high accuracy digital elevation derived from lidar data, slope failure potential maps will be constructed.

In addition to the DEM, the accuracy of the rankings produced by SINMAP are greatly enhanced by site specific data such as soil cores collected in the study area that have been analyzed for shear strength, soil composition, parent material, organic matter, and permeability. As with any model, the more accurate the inputs are, the more accurate is the output. Another critical aspect in landslide assessment is the nature of the groundwater system and how it responds to large rainfall events.  We want to use SINMAP to predict shallow soil slips that produce landslides when groundwater levels are raised such that elevated pore pressures exist in the subsurface.

The mountainous regions of upstate South Carolina typically have thin soils and receive in excess of 50 inches of rainfall each year. Steep slopes, excessive rainfall and specific vegetation types are the main drivers of slope failures. Jones’ Gap and Caesars Head State Parks are both covered in dense forests and have the steepest slopes in South Carolina. The likelihood of landslides increase with each factor (high elevation, dense vegetation, excess moisture) and are more likely to reoccur in the same areas. Accordingly, previous slope movement deposits will be mapped and entered into SINMAP .

SINMAP is a raster-vector data model that runs under the infinite plane slope model with pore pressures interpreted using steady state models of hydrology (1). The infinite plane slope model runs under the assumption that the slope extends for a long distance (i.e., infinitely) and has a subsurface profile that is consistent along the entire slope. In this idealized model, the failure plane is parallel to the slope. Properly calibrated, SINMAP can predict slope failures that result from major rainfall events. 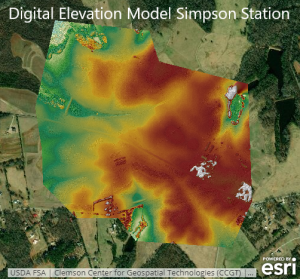 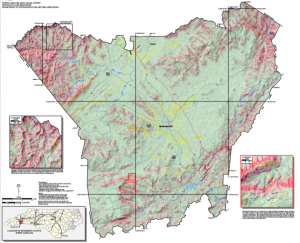 After obtaining a research permit to collect samples in Jones’ Gap and Caesar’s Head, the following steps will be taken.

Each area that a core is taken from will also undergo soil tests through the agriculture services lab in Clemson,  SC.

The data collection portion of the research will take place in the upcoming Fall 2019 semester with a final report completed in the Spring 2020 semester.

Thanks to Creative Inquiry for financial support and the Geology Program Undergraduate Research Initiative!

Development of a Device to Fabricate Sutures Coated with Functionalized Electrospun...