Cerebral Creatine Deficiency Syndrome (CCDS) results in intellectual disability and autism due to a malfunction in the creatine transporter gene (Slc6a8).  The purpose of this project was to determine if Mendelian inheritance occurred in the expected ratio by identifying heterozygous and homozygous slc6a8 knockout fish. As zebrafish are pseudo tetraploid, the fish carry two versions of the slc6a8 gene; the ortholog (a) and the paralog (b). To create lines for CCDS in zebrafish for testing candidate drugs, we must have knockouts of both the slc6a8a and slc6a8b lines.  We needed to genotype a sample group of approximately 80 zebrafish identify carriers.  Genotyping was done by DNA extraction from tail fin samples and amplified via PCR.  The PCR samples were then analyzed on agarose gel, purified, and sent off for sequencing.  Sequencing results were analyzed and based on the resulting genotype, fish were sorted into wildtype, heterozygote, and homozygote groups.  When crossing slc6a8a or b heterozygous, we would expect a Mendelian ratio of 50% heterozygote, 25% unaffected, and 25% homozygote fish.  For slc6a8a we found an inheritance ratio of 14/10/0/ (n=24).  These results indicated that homozygous knockout of the slc6a8a gene was lethal with 100% penetrance, although homozygous fish could still be identified with ongoing genotyping.  Heterozygotes were 41.67% of the genotyped fish which means that heterozygosity is also lethal with an approximate 60% penetrance. 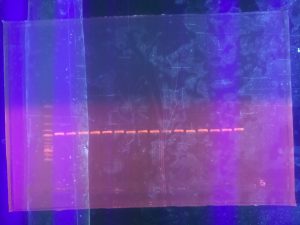 Adult zebrafish were anesthetized using MS-222.   A piece of tailfin was cut using a blade and transferred to a microcentrifuge tube.  Fish were returned to system water to recover before being returned to the system.

After 12 hours the sample was amplified via PCR using gene-specific primers.

Post-PCR, the sample was run on a 1% agarose gel at 80V for approximately 1 hour and then imaged (Bio-Rad ChemiDoc) in order to determine if the correct size band was obtained; slc6a8a (479bp).

After the gel was imaged, the Exo-CIP kit (New England Biolabs) was used to purify the PCR product.  The purified PCR product sequenced by EtonBioscience along with a sample of the forward primer. 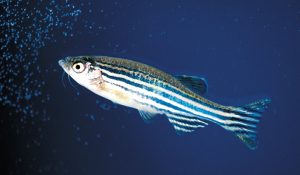 Cerebral Creatine Deficiency Syndrome (CCDS) results from malfunctioning transportation of creatine or impaired creatine synthesis, resulting in creatine metabolism errors.  There are three primary types of CCDS: creatine transporter deficiency (CTD), guanidinoacetate methyltransferase deficiency (GAMT), and agrinine: glycine amidinotransferase deficiency (AGAT).1  CTD is the most common form of CCDS and is resultant of a mutation in SLC6A8, the creatine transporter gene.  Both GAMT and AGAT can be treated by creatine supplementation, but lack of a functioning transporter in the brain prevents creatine from entering neuronal cells.

In humans, the inheritance pattern for CTD is X-linked, meaning that it manifests in males due to it being located on the X chromsome.  Female carriers of the disorder tend to not to exhibit overt symptoms of the disorder as they have two x chromosomes.

Lack of creatine in the brain has severe impacts on function due to creatine being necessary to recycle adenosine triphosphate (ATP) in the brain, that is essential in sustaining the dynamic energy requirements during brain development.  Afflicted patients exhibit global developmental delays, and many present intellectual disability of varying severity.  Additional symptoms of CCDS include gastrointestional issues, seizure disorders, behavior disorders, muscle weakness, and autism-like behaviors.

In order to study treatment methods for CTD, Zebrafish, Danio rerio, are being used as a model organism.  Zebrafish have two paralogs of the slc6a8 gene: an ortholog, slc6a8a and its paralog, slc6a8b.  A model organism for CTD in zebrafish would ideally have both copies of the gene knocked out.  The purpose of this study was to identify slc6a8a knockout fish using genotyping.

Of the 24 zebrafish the genotyping protocol was run on, 14 were wildtype and 10 exhibited the heterozygote genotype

Image (above): Sequencing results from Etonbioscience.  To determine if the fish was wildtype or heterozygous, the sequence TCAGGT was searched for.  The presence of a singular T peak at end of the search sequence indicates wildtype.

Of the fish genotyped, 41.67% were heterozygotes, with the remainder being wildtype. Due to Mendelian genetics, it was expected that approximately 50% of the genotyped fish should have presented as heterozygous. It is possible as more fish are genotyped, the percentage heterozygous will be closer to 50%, but currently heterozygosity is lethal at 60% penetrance.  No homozygotes have been identified, and thus, homozygosity is 100% lethal.  Thus, our slc6a8a mutant fish do not follow patterns of Menedlian inheritance.

Genotyping is ongoing to process the remaining 56 fish of the original 80 that wer obtained from ZIRC.  Positively identified heterozygotes will be bred and their embryos harvested and processed from quantitative real time PCR.

This research is supported by Clemson University’s Summer CI & UR, the Department of Biological Sciences, and R03MH115354 and R03HD088942 to S.C.C.

Dinosaurs to Birds: Ontogeny and Morphogenesis