Pseudoscorpions, also known as false scorpions or book scorpions, are an understudied group of micro-arthropods. There is a lack of information about pseudoscorpion biodiveristy generally, and even less information about pseudoscorpions in the Southeastern United States and in Great Smoky Mountains National Park in particular. Our main goal was to better understand pseudoscorpion biodiversity in the park, in order to begin asking ecological questions about this group of organisms, including questions about their spatial and temporal distributions. To do this we examined the established methods of pseudoscorpion taxonomy and identification and, using microscopy, began to sort specimens into suborder, superfamily, family, genus and species where possible. From this work, we can begin to establish which taxa of pseudoscorpions are present in the park, and at which elevations, and locations. ”

Pseudoscorpians are a group of microarthropods within the class Arachnida. The order Pseudoscorpiones contains more than 3300 species, members of which have been found in fossilized amber as far back as the middle Devonian (Benavides et al., 2019). Ecologically, pseudoscorpions are voracious predators, and predate on many arthropods that humans consider to be pests. Despite this, pseudoscorpions are understudied.  Thus, little is known about their role in communities and ecosystems, or even about their distributions and population dynamics.  The first step towards better understanding pseudoscorpion ecology is to develop species lists for specific regions.  Focusing on pseudoscorpions that inhabit leaf litter, our goal for this project was to identify the groups of pseudoscorpions present in Great Smoky Mountains National Park.

Leaf litter samples were gathered every two months from August to November, across a total of 17 different sites in the Great Smokey Mountains National Park (GSMNP). Each litter sample was hung in winkler extractors for 14 days, with a shaking step on the third day.  Specimens collected from the winkler extractions were preserved in 100% ethanol. Each collection of specimens was then sorted under a microscope, and ants and pseudoscorpions were placed into separate micro-centrifuge tubes filled with 100% ethanol. A thorough evaluation of the literature was then performed in order to identify the current established methods of pseudoscorpion taxonomic identification.  Effort was made to find published keys that were as recent and as geographically relevant as possible.  However, because no taxonomic keys exist for our region, keys from different regions of the United States, as well as the rest of the world were compared to determine features that were most likely to be diagnostic for our specimens. Pseudoscorpion specimens were then examined with a microscope.  First, pseudoscorpions were sorted to morphospecies. Next, we attempted to identify the taxonomic status of each specimen. Finally, each individual was placed in a seperate micro-centrifuge tube filled with 100% ethanol. This was done to preserve pseudoscorpion DNA for eventual DNA barcoding. 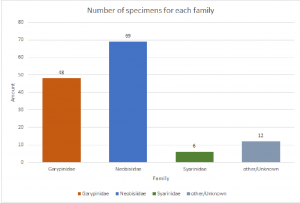 Figure 1- the number of specimens identified in each family. 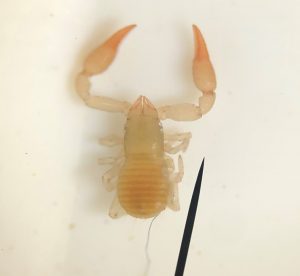 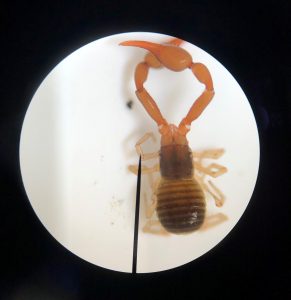 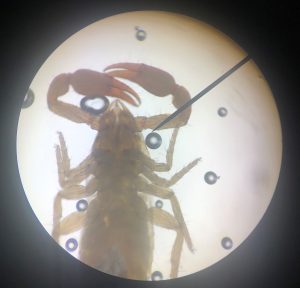 As the data showed, psedoscorpian diversity across the GSMNP was made up mainly from 3 families, Neobisiidae, Garypinidae, and Syarnidae. The family Neobisiidae is diverse, and is common in deciduous forest leaf litter, and is found across North America (Buddle, C., M., 2010). Neobisiidae species can be found in the near arctic, as well as the sub-tropics, making them holoarctic (Hoff, C., C., 1949). The genus Microbisium contains 3 species in eastern North America that are almost indistinguishable from each other, and all three like moist, damp environments. Based on data from environments that receive less rainfall than the GSMNP, Preliminary observation suggests that there is a greater abundance of Microbisium in the GSMNP (Hoff, C., C., 1949). In addition to this, Microbisium were grouped together more frequently than in previous studies, whether this is an indicator of greater density is not currently known (Hoff, C., 1945). The family Garypinidae is generally less diverse compared to the Neobisiidae, and prefers a slightly drier and more rocky environment. Within the genus pseudogarypinidae, there are only four species, three of which occur in the continental united states (Buddle, C., M., 2010). The pseudogarypinidae are also common in bird nests and on and around large mammals. As with the Microbisium, specimens were found in larger groupings as compared to previous studies (Hoff, C., C., 1949). As for the Syarnidae, the literature suggests that only one genus occurs in the eastern United States and Canada, with six species described. However , the Syarnidae have a problematic taxonomic classification, and identifying species is especially challenging (Weygoldt, P., 1969). It is not clear if these particular three families are common in months outside of August to November, however follow up work using specimens gathered in a different part of the year could quickly begin to answer Ecological questions of this type. The remaining samples that were unable to be identified show that greater diversity is present, however further study is needed in order to quantify this.

The pseudoscorpians while relatively unknown, create a fascinating prospect for research. Work is needed in the study of their ecology, anatomy, life cycles, and taxonomy. The research done with pseudoscorpian venoms, silks, and anatomy has the potential to aid in the development of human technologies. By answering the foundational questions of Spatial Temporal distribution, an entire filed of study becomes available.

None of this work could have been accomplished without the help of  Dr. Sharon Berwick, Daniel Malagon, and Drew Kanes, my gratitude to all of you. Thank you as well to the summer CI program for this amazing opportunity.

Deciphering the Role of BCCIP in Homologous Recombination, Genomic Stability,...

The Impact of COVID-19 on Packaging, Safety and Food Waste
Scroll to top