Coyote and Prey Interactions in the Piedmont of South Carolina

Predator-prey interactions are complex and influenced by various factors, including the temporal activity patterns and space use patterns of each species. Studying overlap between these patterns will therefore further our understanding of the relationships between predators and prey. Coyotes (Canis latrans), a relatively novel top predator in the Southeast, have been shown to be effective white-tailed deer (Odocoileus virginianus) fawn predators in the region. Identifying coyote diel activity patterns and space use patterns in relation to the diel activity patterns and space use patterns of their prey, specifically deer and rabbits (Sylvilagus floridanus), could provide insight into coyote prey selection during fawning season in the Southeast. Our objectives were to quantify coyote, deer, and rabbit diel activity and space use patterns and compare the degree of overlap between these species during fawning season. We hypothesized that predator diel activity is positively related to prey diel activity, and that predator space use is positively related to prey space use. In order to quantify activity, we deployed an array of wildlife cameras across a study area in the Piedmont of South Carolina and used the photo management software digiKam to add metadata to photos. To compare the degree of temporal activity overlap between our focal species, we calculated their overlap coefficients during May 2019. We found that coyote temporal activity was similar to prey temporal activity, with all target species staying active through the night and showing the highest activity during dusk and dawn. We found coyote space use was related to prey space use, with similar overlap between coyote-deer space use and coyote-rabbit space use. An opportunistic hunter, the coyote may be active at night and in similar areas as its target prey to increase the odds that it will come across active deer or rabbits.

Quantify coyote, deer (doe), and rabbit diel activity and space use patterns and compare the degree of overlap between these species during fawning season 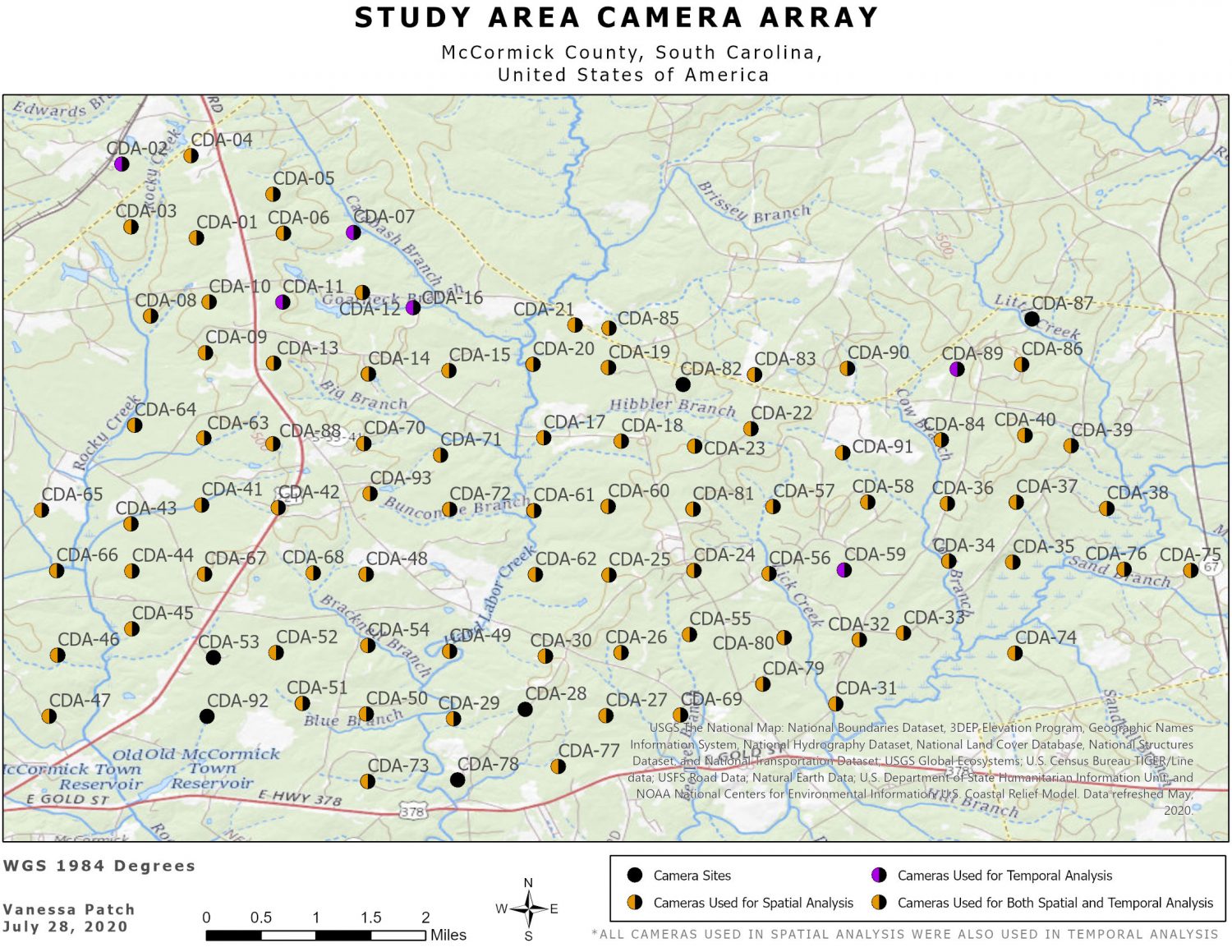 Coyotes were detected at most of the camera sites where deer or rabbits were active (94% and 96%, respectively), which could indicate that they actively search for rabbits or fawns in these areas. Although we predicted that coyote space use would overlap more with deer space use than rabbit space use, we found overlap between coyotes and deer and coyotes and rabbits to be nearly equal. This similarity could indicate that rabbits are easier to catch even though fawns are a more substantial meal, or coyotes may spend more time than usual in areas occupied by deer during the month of May due to the availability of fawns as a prey option.

All three species were detected at only 11 (14%) of the 81 camera sites. As an opportunistic hunter, the coyote was active at night and in similar areas as its target prey, perhaps to increase the odds that it will come across active deer or rabbits.

Thank you to Elizabeth Saldo, Alex Jensen, Mike Muthersbaugh, and Dr. David Jachowski for your mentorship during this unorthodox summer. Thank you to the Clemson University Summer CI & UR Program for offering this opportunity.

A Theory for High Dimensional Fluorescence Barcoding of Single Cells