Histology of Araucana Chickens for Insight into TBX1 Gene Mutations

Araucana are a strain of chicken that have multiple genetic mutations causing them to possess certain unusual features such as tufted ears and rumplessness. Our analysis of the Araucana genome has shown that one of these mutations is in the region of the TBX1 gene, which codes for the TBX1 protein that plays a role in the embryonic development of many tissues, including the inner ear, heart, thymus, and facial bones. Araucana embryos that died before hatching were frozen so that they could be studied using histological analysis to gain more information about the effects of this genetic mutation. The chicken heads and hearts were removed, processed, embedded in paraffin, then sectioned and placed onto microscope slides. These were stained so that the tissue could be examined and photographed using a microscope. The Araucana heart shows defects in the formation of the major arteries and veins, as well as a connective tissue disorder in the muscle. The heads had holes in the tissue under the jaw that  opens to the outside and parts of the inner ear were destroyed. Insight into the function of the TBX1 gene region gained from Araucana may help us to understand more about the human disorder DiGeorge syndrome, which is caused by a deletion in the same gene region. 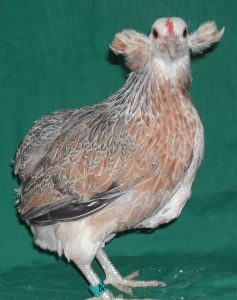 TBX1 is a member of the T-box family of genes and encodes for a transcription factor involved in a complex and highly regulated genetic pathway especially active in early vertebrate development. This specific pathway governs the embryonic pharyngeal system that contributes to the formation and morphogenesis of many different structures including the heart, certain endocrine glands, facial bones, and structures of the inner ear [1]. The exact function of the protein product of the gene is not entirely known, but it is evident that its proper functioning is vital to normal development as the absence of just one of the copies of the gene leads to a range of physical and mental abnormalities. Due to the wide array of symptoms, multiple different disorders are thought to be caused by deletion at this gene including DiGeorge syndrome and velocardiofacial syndrome, and are now grouped together under the name 22q11 deletion syndrome (22q11DS) after the location of the mutation on the q arm of the 22nd chromosome. Although 22q11DS is caused by the deletion of a 1.5-3 Mbp region that contains multiple genes, current research indicates the TBX1 is a major genetic determinant of the disorder. 22q11DS impacts approximately 1 in 4000 live births and its symptoms include anomalies in the cardiac outflow tract, hypoplasia of the thymus and parathyroid, cleft palate and other facial dysmorphogenesis, and certain learning and psychiatric disorders [2].

Araucana are a breed of domestic chicken originally sought after for their blue-shelled eggs, unique ear tufts and short tails. Analysis of the Araucana genome has shown that individuals that have ear tufts are heterozygous for a mutation in a .58 Mbp region on the 15th chromosome, which contains the chicken TBX1 gene which is homologous to the human version. Chickens that possess this mutation have a relatively high mortality rate in their eggs as well as directly after hatching, indicating that there are developmental issues associated with this breed [3]. The aim of my investigation was to analyze the heart and facial structures of Araucana chickens that died before hatching using histology. By sectioning the tissue into thin slices that could be stained on microscope slides and photographed, I was able to identify some key abnormalities found in the chickens development that shed some light on the different processes that TBX1 governs. 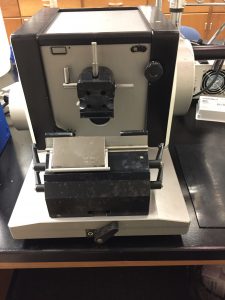 During the dissections several abnormalities were noticed in the developing Araucana chicken embryos. Their hearts appeared smaller, deformed and some were even discolored in comparison to the hearts of wild type embryos that were harvested at an earlier stage. Many of the Araucana also possessed holes in the flesh on their lower jaw near the hyoid bone that were allowing outside materials to get into the developing chicks body. These malformations probably explain why these chickens died before they were even able to hatch from their eggs.

Sectioning the hearts enabled the inner components like the atria and ventricles as well as the blood vessels immediately attached to the heart to be examined. The muscle of the entire heart shows a connective tissue disorder, with individual muscle fibers separated from each other. When compared to the wild type hearts, Araucana also appear have much smaller inner heart compartments due to that fact that the tissue is torn apart and has expanded space of the atria and ventricles. The major blood vessels also exhibit this problem with connective tissue as well as appearing thin walled and oddly shaped in comparison to the wild type. 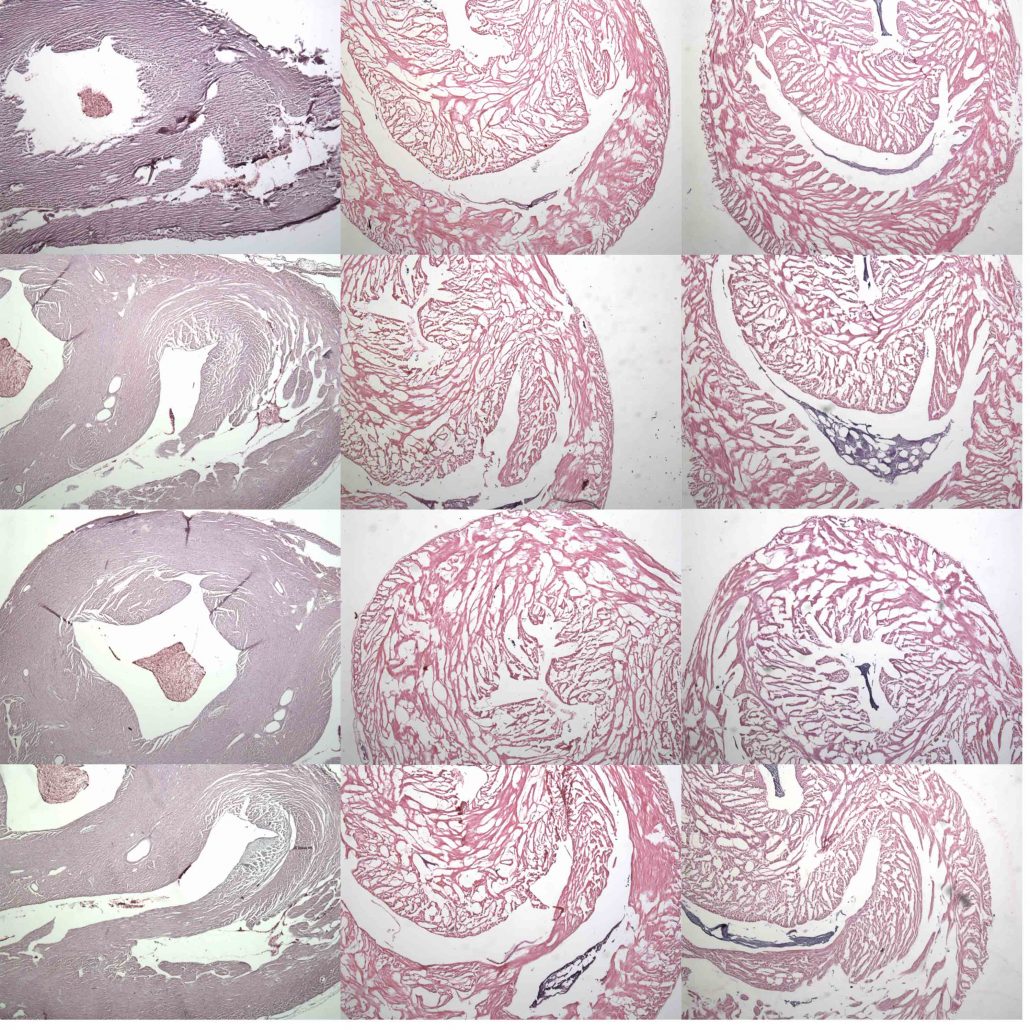 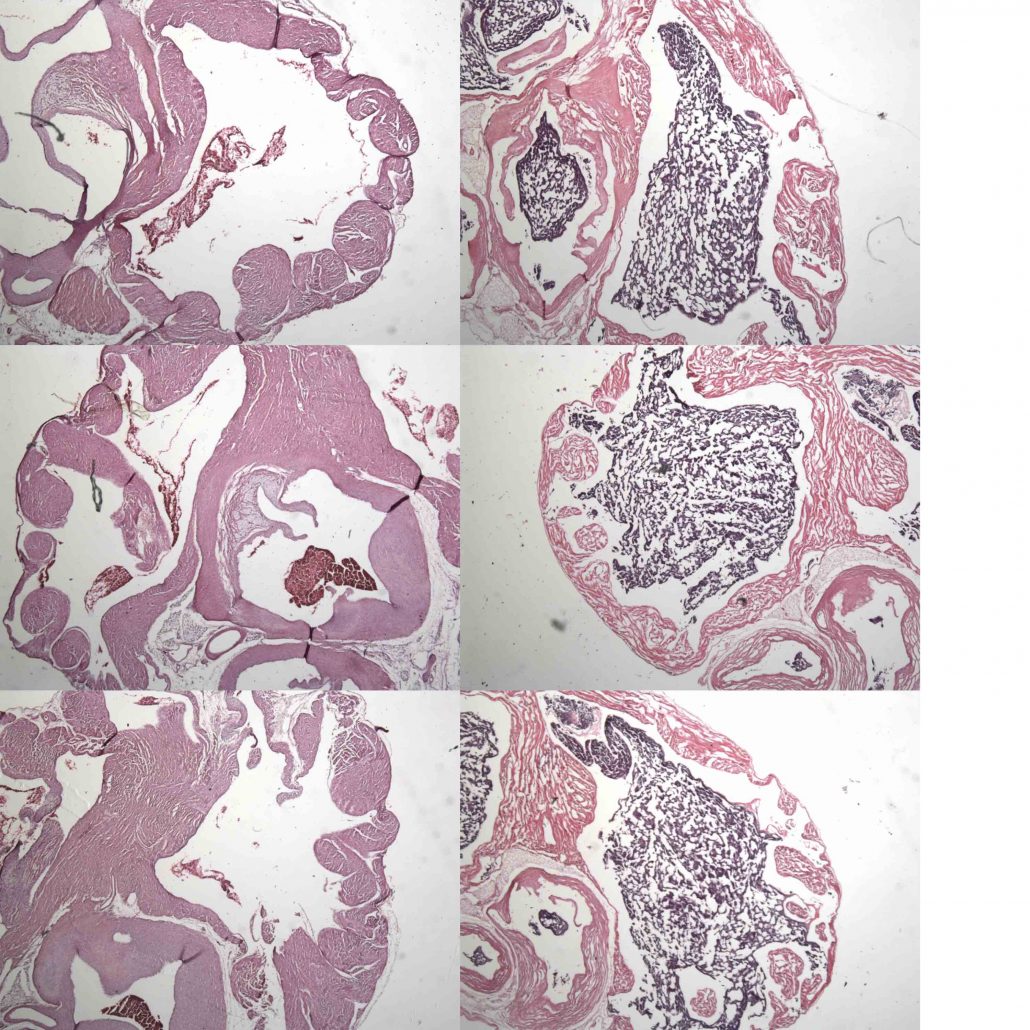 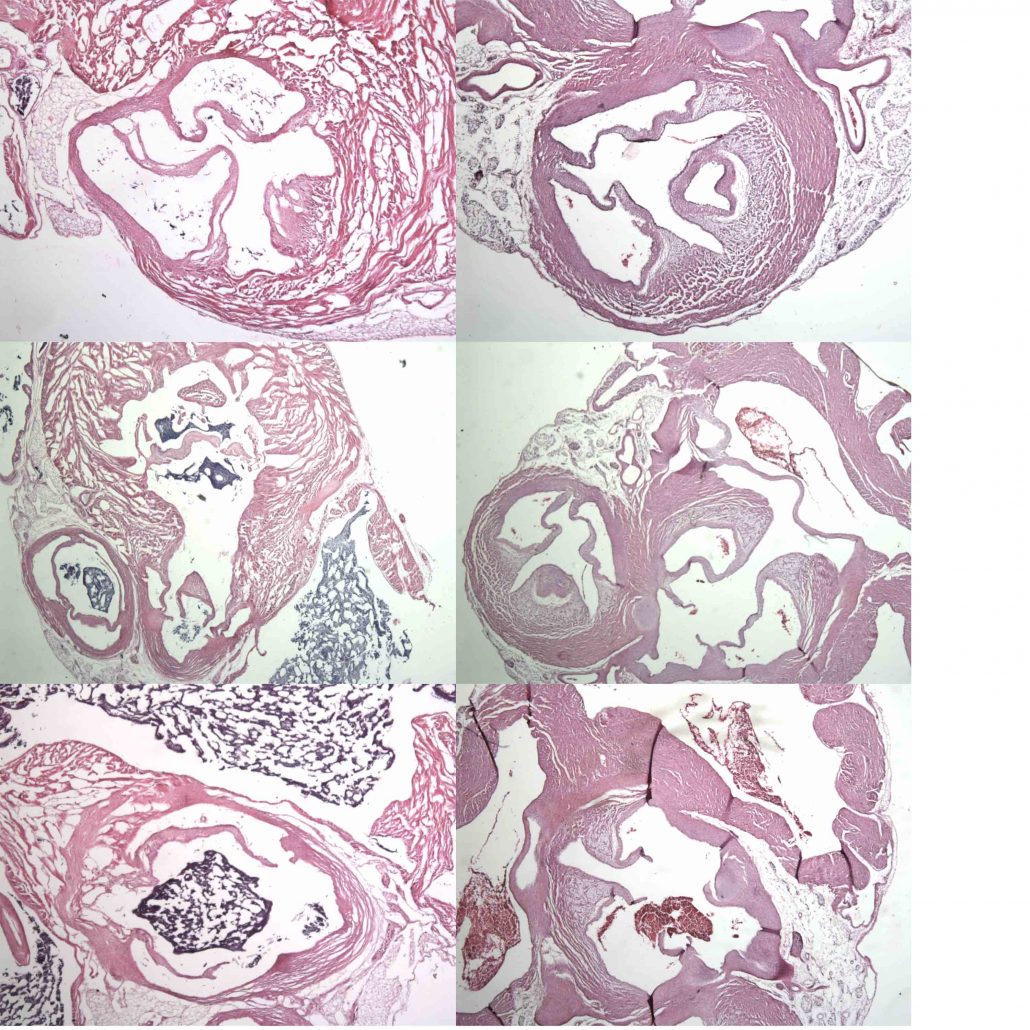 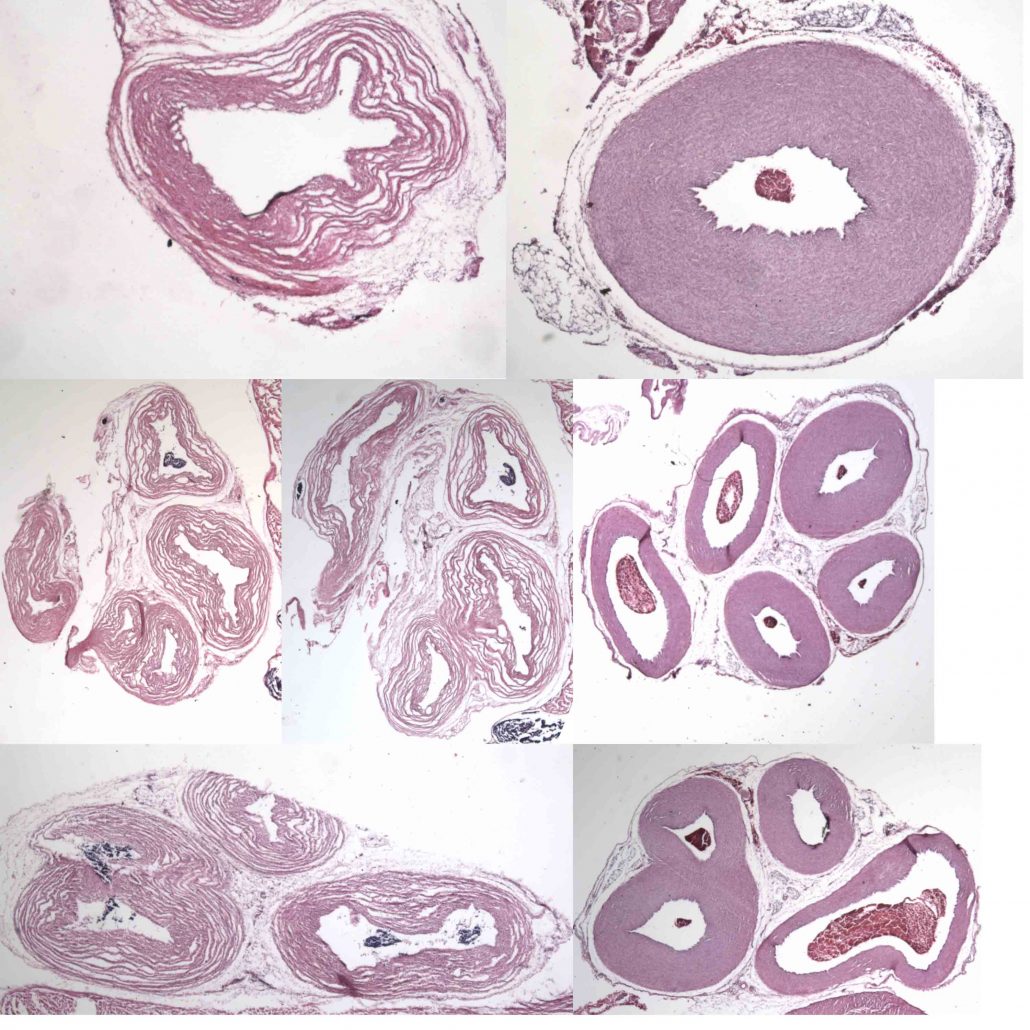 Like the heart, several features unviewable from the outside of the head were examined through the sections, especially the middle and inner ear. As with the heart, the muscles and other parts of the head like the brain possess the same connective tissue disorder with large gaps separating strands of tissue. The holes that were visible on the outside of the head opened into the middle ear cavity, which was almost completely destroyed and full of outside materials. Even many components of the inner ear like the cochlea were deformed or damaged in the Araucana heads. One other abnormality in the face of the birds was in the bones and cartilage, with many misshapen or in the incorrect location.

The abnormalities present in our Araucana embryos show striking similarity to the symptoms of 22q11DS. This supports that TBX1 plays a key role in the overall development of the vertebrate embryo, especially in the heart and facial structures. Individuals with 22q11DS and Aruacana both have mutations on this gene, and due to the commonalities between the two we are led to believe that the improper functioning of the TBX1 protein resulting from a mutation is one of, if not the main cause of these anomalies. Currently whole heads are being stained and the tissue is being cleared using a whole mount skeleton protocol so that the bone and cartilage inside the head can be visualized fully. There are some differences between the two, and both mutations impact a region of the genome that is much larger than just the TBX1 gene so more analysis of the surrounding genes needs to be done. There are also multiple symptoms of 22q11DS like mental disorders that cannot be explained by the TBX1 deletion and probably indicate that a different gene is also involved.