Imagine being able to have experiences and behave as a completely different person. Virtual reality (VR) offers such opportunities. The User Experience in Virtual Reality Games Creative Inquiry project allows students to develop a virtual reality game. Divine Maloney, a graduate student, and Dr. Andrew Robb, both from the School of Computing, mentor this project that addresses issues at the intersection of computer programming and sociology. Each semester this team researches, develops and programs an original video game.

The team’s research focuses on the user experience. Specifically, they are investigating how users relate to their self-avatar. “Instead of seeing the avatar out there, a self-avatar in virtual reality is when you look down and can see it; the avatar overlaps your body,” Robb said. Self-avatars are the mechanism in which players place themselves inside a game. This project aims to dissect the powerful and unexpected effects of self-avatars and virtual reality on a gamer’s behavior by having them experience a self-avatar that does not physically resemble the player. For example, a tall avatar usually increases the confidence of the user. This Creative Inquiry team uses software such as the Unity3D game engine and the Oculus Quest VR HMD (Head Mounted Display) headset to both develop avatars and experience their basic and sometimes, complex characteristics.

Though computer programming is a large component of the project, the team is also investigating the psychological and sociological effects of disassociating, or mentally separating yourself, on video game users and selfavatars. The team recently completed a study on implicit racial bias in video games. Students created a VR simulation in which test subjects were given the task of shooting aliens versus humans. The team studied implicit racial bias by putting themselves into the game as avatars of a race or gender other than their own. The team then recorded how assuming an altered persona in a VR simulation affected each individual’s attitude and choices towards violent actions, such as shooting a gun.

The team presented their work at the annual IEEE Virtual Reality Conference in March, originally scheduled to be in Atlanta, GA. Due to the COVID-19 pandemic, the conference was hosted virtually. But the innate ability for this Creative Inquiry project to work in a virtual space allows them to continue offering students the experience of the complete developmental process of VR from initial research, software learning, game development and testing, to the publication of their findings. It is through this process that students of any major are able to be exposed to video game development and virtual reality software. Depiction of a female avatar being chosen as a game character. 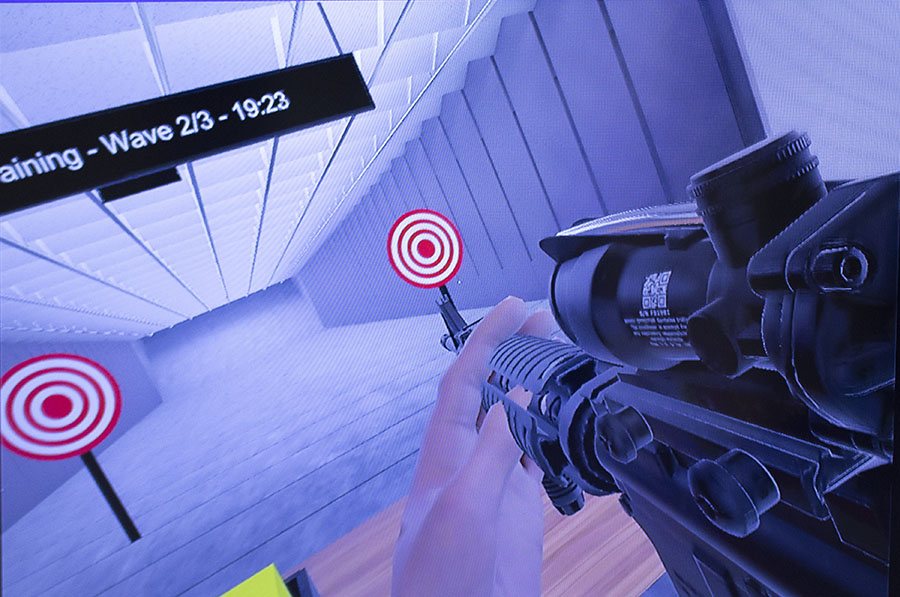 A game screenshot from an avatar at the shooting range.

Waikiki and the World