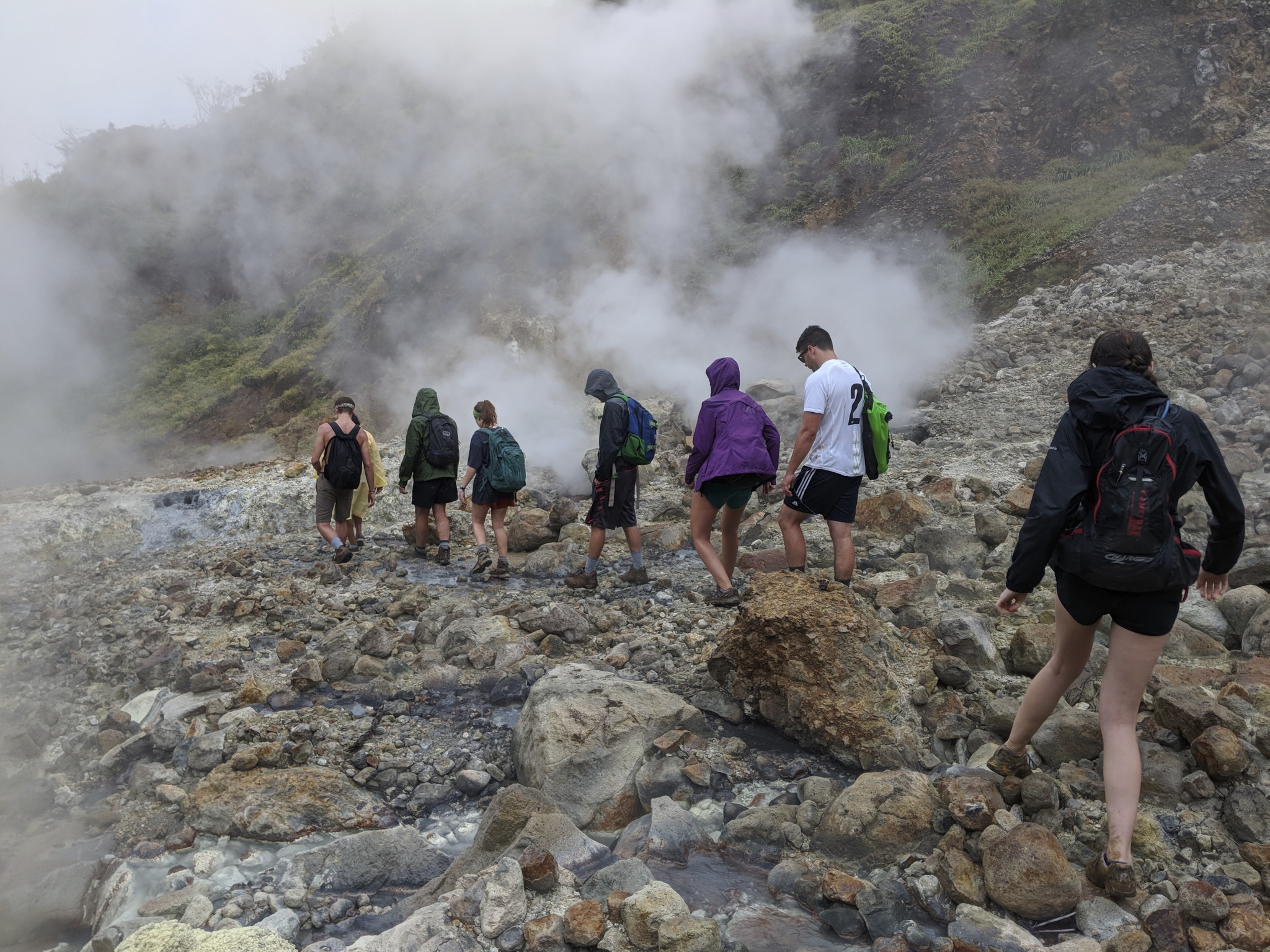 Dominica is the youngest island in the Lesser Antilles, but being young does not mean it lacks in diversity. The island is home to myriads of species ranging from rainforest inhabitants to coral reefs. This island paradise formed around 26 million years ago in an event that many typically associate with catastrophe—a shift of the two tectonic plates and consequential volcanic action. Home to nine volcanoes, Dominica might seem like a hazardous visit, but to the Geological Investigations in Dominica Creative Inquiry project led by Scott Brame, in the Department of Environmental Engineering and Earth Sciences, it is the destination. In fact, during their spring break the team travels to study Dominica’s geology and how it affects the living systems around it. The students are excited to have the opportunity to study in Dominica during spring break. “I’ve never been out of the country before but all of this cool volcanic activity, like the boiling lake and ocean deposits, it’s all stuff I’ve really wanted to see,” Hailey Mundell, a senior geology major, said.

Brame spends a year preparing the students for this trip. While in country, the teams’ research activities range from hiking up volcanoes to exploring the boiling lake to snorkeling in the ocean to examine geological deposits. It may seem like a vacation, but the trip also includes plenty of hard work. The team collects data on sand deposits both in the ocean and on land. These deposits tell a story of how the island arose over 26 million years ago, all the volcanic eruptions since and the activity of the tectonic plates. Volcanic eruptions are important events, they release carbon dioxide and methane gases into the atmosphere potentially compromising air quality. “Volcanoes can impact life on the whole island. We want to understand every type of implication the eruption had and if it does erupt again what could happen,” Ryan Monico, a junior geology major, said. There has not been a large volcanic eruption in Dominica for more than 500 years and there is a general feeling that Dominica is long overdue. Although it is difficult to pinpoint exactly when an eruption will occur, the team’s analyses will help characterize the behavior of the tectonic plates, helping to predict future eruptions. “There’s always a future implication when talking about active volcanoes,” Daulton Geyer, a senior geology major, said. “All of these details can help us predict when it may erupt again and the damage it could cause. The more information we know, the more likely we can help the island avoid unanticipated disaster.” The team’s research is defined by the past but their findings are informing the future. For example, the team is studying the impact of gases released from the volcanic thermal springs into Champagne Reef (named for the bubbles formed by the release of gases). They are analyzing the biological response of microorganisms to the acidity of the water and how it changes over the years. This work will potentially show how these organisms will respond to the effects of climate change.

Drops of Jupiter
Scroll to top