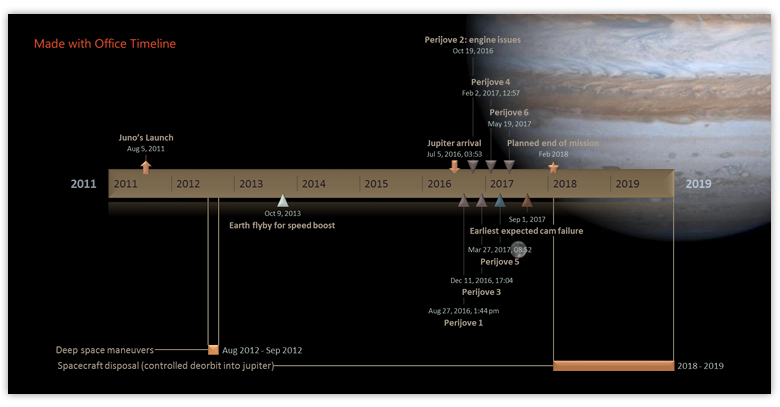 After 10 years of running her own graphic design business, Brantley Kerns returned to college to study astrophysics. Majoring in physics with an astronomy concentration as well as working towards minors in mathematics and English, she found a perfect fit for her interests in the Ground Based Support of the NASA Juno Mission Creative Inquiry project, led by Dr. Máté Ádámkovics in the Department of Physics and Astronomy. The project is acting as ground support for the ongoing mission to Jupiter.

The National Aeronautics and Space Administration (NASA) decided to send the Juno spacecraft to Jupiter because the mid-1990’s Galileo Mission was the last full Jupiter mission and NASA recognized that regular planetary monitoring is key to understanding how the solar system is changing. Juno launched in 2011 and arrived at Jupiter in 2016. Since then, it has been sending back stunning pictures of Jupiter and its Great Red Spot, a 300-year-old giant hurricane raging on Jupiter’s surface. Juno measures Jupiter’s composition, internal structure and water content. NASA uses this data to test planet formation the ory and to hopefully make some conclusions on how Jupiter may have formed.

Juno is not the only machine capable of taking measurements of Jupiter. Telescopes and teams of scientists on earth (ground support) can take measurements. These teams perform observations for data validation of NASA spacecraft measurements. The Keck Observatory in Hawaii houses two such telescopes and they record complementary data to Juno. The Creative Inquiry team gets spectroscopic data from Keck, analyzes it with their computer model and compares their results to results generated from Juno’s data.

The Creative Inquiry team is responsible for making the Python code that reduces and rectifies the data to clean and process the data. This assists NASA scientists in analyzing the data, furthering their mission to decode the secrets of Jupiter’s formation. The data can tell how much water is in Jupiter and the Red Spot. “It can also tell the composition and fluid dynamics that are constantly changing,” Kerns said. While initially confusing, when team members understand what the numbers mean, it is a beautiful system. “When you are actually in the data, things just click,” Kerns said.

Space interest is not required to be a team member. While Kerns and Rachel Conway, a senior physics major, had previous interests in space, Andrew Wetzel, a sophomore computer engineering and physics double-major, joined for the coding and began to like space after working on the project. This Creative Inquiry project has a powerful ability to bring together people who are like-minded in relish for academic research. “There are in-depth things I know from the Creative Inquiry that aren’t taught in regular classes,” Kerns said. All agreed having a relationship with a professor like Ádámkovics was important when they were curious about school or space subjects. “Their energy for learning and doing things is great to be around,” Ádámkovics said.

The students marveled at how far they had come, from barely knowing what Python was to now writing complicated code.

The team will continue to get data from Keck and Juno allowing the students to use their gained knowledge to perfect the data. Kerns will continue to discover her favorite areas of space research and hopefully go on to a career with NASA or another space research company. By the end of Juno’s mission in 2021, NASA and the Clemson team want to know what Jupiter is made of and how it formed. They can then take steps to understand how other planets formed and even hypothesize about the presence of life outside of Earth.