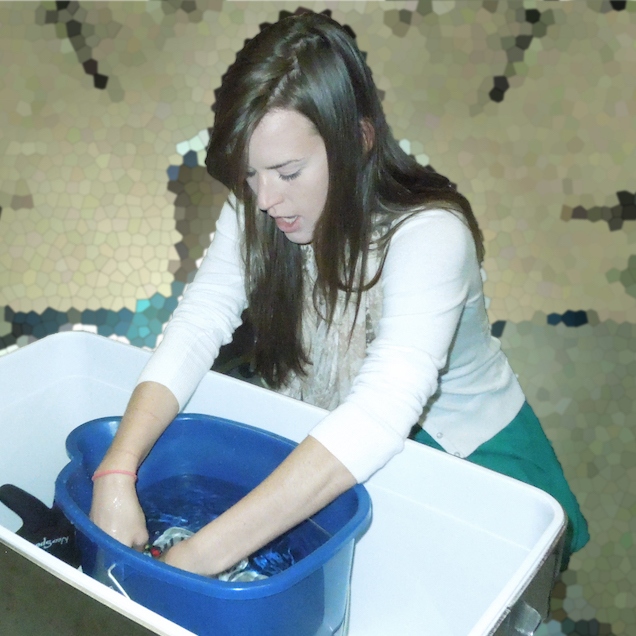 By Alyssa Glazener
Would you be more motivated by a challenge to complete a task as quickly as possible, by trying to keep yourself safe, or by concentrating on how your actions are helping to save lives? Welcome to Courage Research, a Creative Inquiry project led by psychology professor Dr. Cynthia Pury.

Participants in the experiment believe that they are contributing to life-saving research by testing the dexterity of gloves for rescue divers. Senior psychology student Lauren Brotherton measures the amount of time it takes for the subjects to assemble magnets when their hands are submerged in buckets of room temperature water versus their assembly time with ice water. At two to four degrees Celsius, the ice water is cold enough to cause the participant pain.

However, Brotherton and her team are actually measuring the amount of time the participants are willing to endure physical discomfort for a worthy cause, not how long it takes them to complete the tasks.

“What we test is noble courage and people’s willingness to participate in an uncomfortable task if they think that it’s for a noble cause,” Brotherton said. “Sometimes they’ll quit; I’ve had people say before, in the ice water bath that they wanted to stop but they wouldn’t because they’re, ‘Well if it helps save lives, I’ll try to keep doing it.’”

“We are working to develop, test and refine a theory of courage that will allow us to help people become more courageous when they need to be,” Pury said. Her overarching goal is to find a measure of courage. “It’s when someone is voluntarily taking a risk to pursue a noble goal,” Pury said, explaining the definition of courage that her team uses.

For an act to be considered courageous there must be a worthy goal that one is attempting to achieve, and there must be a significant amount of risk involved in the endeavor. In Brotherton’s study, the story about life saving research for rescue divers creates a worthy goal, and the discomfort caused by the ice water is a risk. Pury, Brotherton and their team members hope to find that the subjects who are motivated by the life saving aspects of the study are willing to keep their hands in the ice water longer.

Pury became interested in courage when she was preparing a seminar on fear and horror and found that little research existed on courage. She now leads several projects in which students like Brotherton are intensely involved in a specific study on courage, the results of which will contribute to Pury’s work in the positive psychology field. For example, undergraduate psychology student Shar’Dane Davis is studying courage in sports.

Other studies include survey-based research on defining the process of taking courageous action, understanding how emotions affect perception of courage and understanding cases of “bad,” or socially frowned upon, courage. The students write questionnaires and code the responses into usable data.

Like many Creative Inquiry professors, Pury gives her students autonomy over their projects. Brotherton and two other undergraduate students run the rescue diver study on their own, which takes about an hour per participant.

“If you go to graduate school in psychology, you pretty much have to do some kind of research, so it’s good to have that experience going into grad school,” Brotherton said. When she had an idea to add an extra condition to test in the experiment, Pury encouraged her to include it.

“I’m really hoping they get the sense of excitement that I got when I was an undergraduate and started getting involved in research that might end up in textbooks and might influence the field as a whole,” Pury said of her Creative Inquiry students. “This is really students’ opportunity to work on projects that really matter.” She recommends that students get involved early in a Creative Inquiry; because scientific studies can take years to conduct, students get more out of their experience when they work on a project for multiple semesters.

“It’s kind of cool to be in a research area that I’m passionate about too, and that it know will help me, moving forward,” Brotherton said. She finds that being part of the latest research on courage is exciting. “It’s cool to see where it’s going, what new knowledge is going to be coming out and things that are going be published.”

Can You See The Rain?
Scroll to top