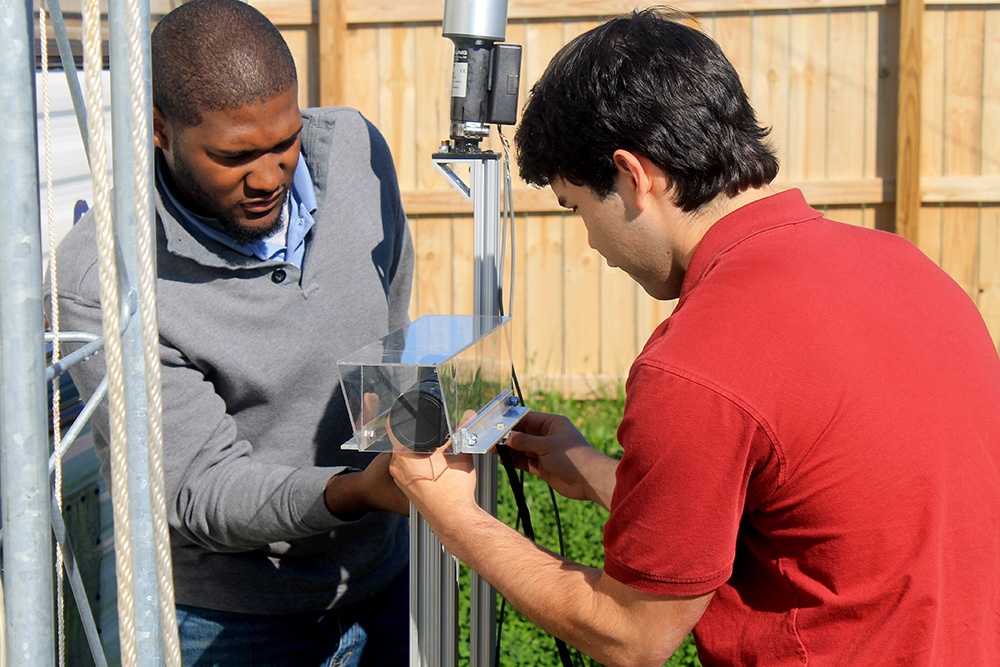 By Colby Lanham
Rainfall, itself, seems like a simple concept, but have you ever stopped to think about how hard it rains, the amount that falls or even how a raindrop is shaped?

In the Creative Inquiry project High-Speed Imaging of Rainfall, undergraduate students collect images to investigate raindrop shape, size and fall velocity. They then analyze these images in the context of the environmental factors and processes that govern these raindrop characteristics. By doing so, this project may identify measurement errors in polarimetric weather radar, a type of radar used to locate precipitation, calculate its motion and collect rainfall amounts.

This research is funded by the National Science Foundation and designated as Award No. AGS 1144846. It is offered as a Creative Inquiry project to support the project’s goals to integrate teaching and research and help develop the pipeline of well-educated, research oriented students who will pursue graduate studies in this field of study.

Undergraduate students are involved in every facet of the research. Students help to establish field sites, learn how to properly install the rainfall instruments, analyze data and participate in writing reports. Rain data will be collected over a two-year period with the goal to analyze as much rain as possible.

During their project meetings, students discuss their research progress and findings with the team leader Dr. Firat Testik, an associate professor in the Department of Civil Engineering. Once the data is collected, studied and processed, Testik and his students intend to publish their findings and present them at professional conferences.

Testik regards the development of thinking skills as a fundamental part of this Creative Inquiry project. He also believes that working on this project will develop students’ originality.

“I want to keep the Creative Inquiry a little bit open-ended, and if there is a good problem we identify, I want us to follow that problem and seek some answers,” Testik said.

Testik’s students enjoy the practical experience they receive from this project. “I get to see hands-on experience. Every week we meet, we bounce ideas off each other so you’re actually in the process of coming up with the solutions at the end of the day,” Karuiam Booker, a senior civil engineering major, said.

“Throughout this project, I encourage all of the students to be involved in publications through conferences, especially undergraduate research conferences,” Testik said. “I want them to send abstracts, posters or papers to these conferences and attend them as finitely as possible. I want to integrate this research as part of my teaching, so I see this as a great opportunity for undergrads to be exposed to a research environment, as it is important if they want to do research-based work as a career after graduation.” 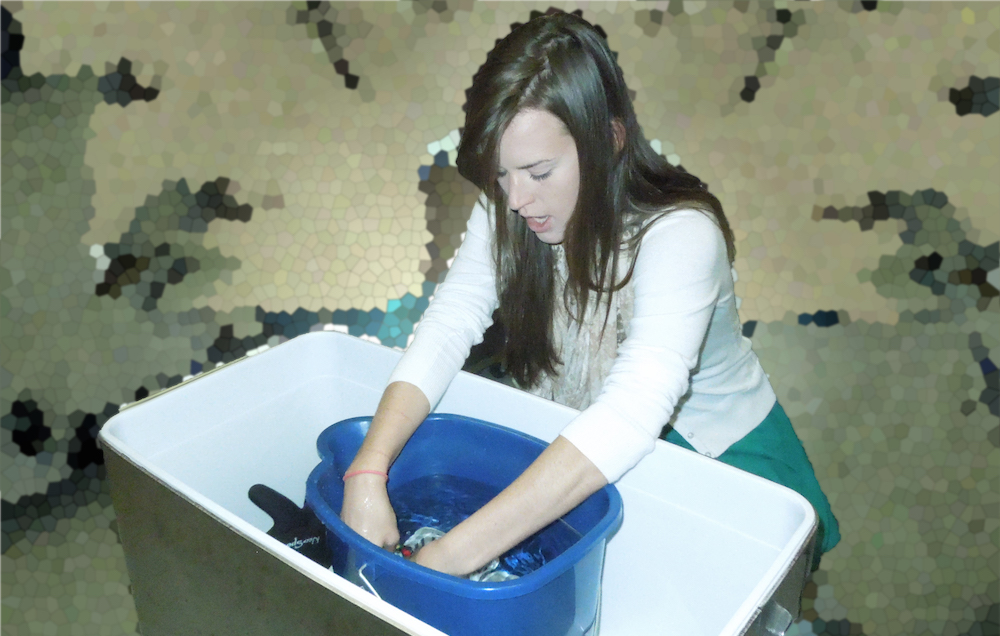 By Alyssa Glazener
Would you be more motivated by a challenge to complete a task as quickly as possible, by trying to keep yourself safe, or by concentrating on how your actions are helping to save lives? Welcome to Courage Research, a Creative Inquiry project led by psychology professor Dr. Cynthia Pury.

Participants in the experiment believe that they are contributing to life-saving research by testing the dexterity of gloves for rescue divers. Senior psychology student Lauren Brotherton measures the amount of time it takes for the subjects to assemble magnets when their hands are submerged in buckets of room temperature water versus their assembly time with ice water. At two to four degrees Celsius, the ice water is cold enough to cause the participant pain.

However, Brotherton and her team are actually measuring the amount of time the participants are willing to endure physical discomfort for a worthy cause, not how long it takes them to complete the tasks.

“What we test is noble courage and people’s willingness to participate in an uncomfortable task if they think that it’s for a noble cause,” Brotherton said. “Sometimes they’ll quit; I’ve had people say before, in the ice water bath that they wanted to stop but they wouldn’t because they’re, ‘Well if it helps save lives, I’ll try to keep doing it.’”

“We are working to develop, test and refine a theory of courage that will allow us to help people become more courageous when they need to be,” Pury said. Her overarching goal is to find a measure of courage. “It’s when someone is voluntarily taking a risk to pursue a noble goal,” Pury said, explaining the definition of courage that her team uses.

For an act to be considered courageous there must be a worthy goal that one is attempting to achieve, and there must be a significant amount of risk involved in the endeavor. In Brotherton’s study, the story about life saving research for rescue divers creates a worthy goal, and the discomfort caused by the ice water is a risk. Pury, Brotherton and their team members hope to find that the subjects who are motivated by the life saving aspects of the study are willing to keep their hands in the ice water longer.

Pury became interested in courage when she was preparing a seminar on fear and horror and found that little research existed on courage. She now leads several projects in which students like Brotherton are intensely involved in a specific study on courage, the results of which will contribute to Pury’s work in the positive psychology field. For example, undergraduate psychology student Shar’Dane Davis is studying courage in sports.

Other studies include survey-based research on defining the process of taking courageous action, understanding how emotions affect perception of courage and understanding cases of “bad,” or socially frowned upon, courage. The students write questionnaires and code the responses into usable data.

Like many Creative Inquiry professors, Pury gives her students autonomy over their projects. Brotherton and two other undergraduate students run the rescue diver study on their own, which takes about an hour per participant.

“If you go to graduate school in psychology, you pretty much have to do some kind of research, so it’s good to have that experience going into grad school,” Brotherton said. When she had an idea to add an extra condition to test in the experiment, Pury encouraged her to include it.

“I’m really hoping they get the sense of excitement that I got when I was an undergraduate and started getting involved in research that might end up in textbooks and might influence the field as a whole,” Pury said of her Creative Inquiry students. “This is really students’ opportunity to work on projects that really matter.” She recommends that students get involved early in a Creative Inquiry; because scientific studies can take years to conduct, students get more out of their experience when they work on a project for multiple semesters.

“It’s kind of cool to be in a research area that I’m passionate about too, and that it know will help me, moving forward,” Brotherton said. She finds that being part of the latest research on courage is exciting. “It’s cool to see where it’s going, what new knowledge is going to be coming out and things that are going be published.” 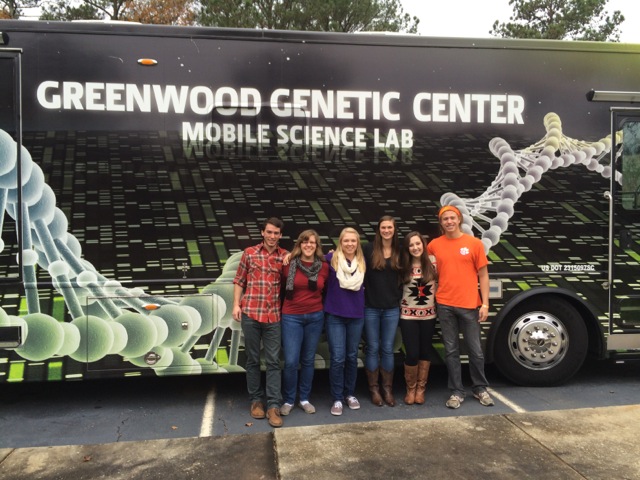 By Chelsea Kozma
What happens when you breed purebred dogs? Sometimes the outcome is excellent, but some may be afflicted with one of the more than 600 hereditary diseases that affect dogs. In order to inform breeders about the chances each litter has of inheriting different diseases, genetic counselors must explain complicated genetic equations to dog breeders.

The Creative Inquiry, Genetic Counseling for Dog Breeding, was designed to bridge the gap between the field of genetics and dog breeders. Two Clemson researchers, Dr. Alison Starr-Moss and Dr. Leigh Anne Clark in the Department of Genetics and Biochemistry, have studied canine genetics for fifteen years and spend a lot of time talking to dog breeders.

“When you talk to the dog breeders you realize that the majority of them don’t have a strong grasp on genetics. The breeders are sometimes surprised at what they get when they breed the dogs, so we spend a lot of time explaining how certain genetics works,” Clark said.

The Creative Inquiry project originated with a plan to develop a brochure that clarified the common misconceptions that dog breeders have about genetics. The brochure would help the genetic counselors explain certain concepts using illustrations and Punnett-squares as visual aids. Starr-Moss and the students met with genetic counselor Lori Bassett at the Greenwood Genetics Center to learn how to communicate successfully with dog breeders. Bassett heads the Center’s Communications office and helped the students explain complex genetic equations without the use of medical jargon.

“I have learned about the public and how much they know about genetics. This CI has taught me how to speak to others about genetics in a way that they will understand without having had any genetic education,” Erin Peterson, ajunior genetics major, said.

In order to write the brochure, the students travel to events to interact with breeders and research what they know about genetics. Teaching genetic concepts without the genetics language is, according to Clark, “a lot like the game Taboo, where you have to get the person to say a word without using certain words.”

The students conducted a short survey at the Fall Tailgate for the College of Agriculture, Forestry and Life Sciences and collected data for their brochure by giving attendees “puppy chow” snacks in return for answering basic genetic questions. They also interviewed breeders at a show sponsored by The Atlanta Golden Retriever Club Agility Trial at Clemson’s Garrison Arena.

Sophomore Genetics major Alex Davis observed, “I’ve learned a lot about the various diseases that breeds of dogs are susceptible to and how very little breeders understand these diseases.”

The students plan to set up a website where visitors may anonymously log in and ask genetics questions. The website would explain concepts in more depth than the brochure.

The students believe that this website will be more effective than the brochure and interviews since some breeders are reluctant to ask questions about genetics and breeding at shows. Next year, Starr-Moss and Clark hope to give their CI students more opportunities to travel and get hands on experience with dog breeders at shows and events.

“One of the problems that we faced in the beginning was when we realized students didn’t know dog breeds,” Clark said. “You can’t send a genetic counselor over to a dog breeder, and have them ask, ‘What kind of dog is that?’ Then you have lost credibility with the dog breeders.”

Clark believes the Creative Inquiry will inform breeders about genetic concepts and give breeders and students the tools for successful communication.

“A lot of what we do is rewarding when we get a chance to talk to breeders, when they actually start to understand what you are trying to explain and you can see that something has just clicked,” Clark said. Once they understand the basic concepts, breeders can see that this is just simple genetics.