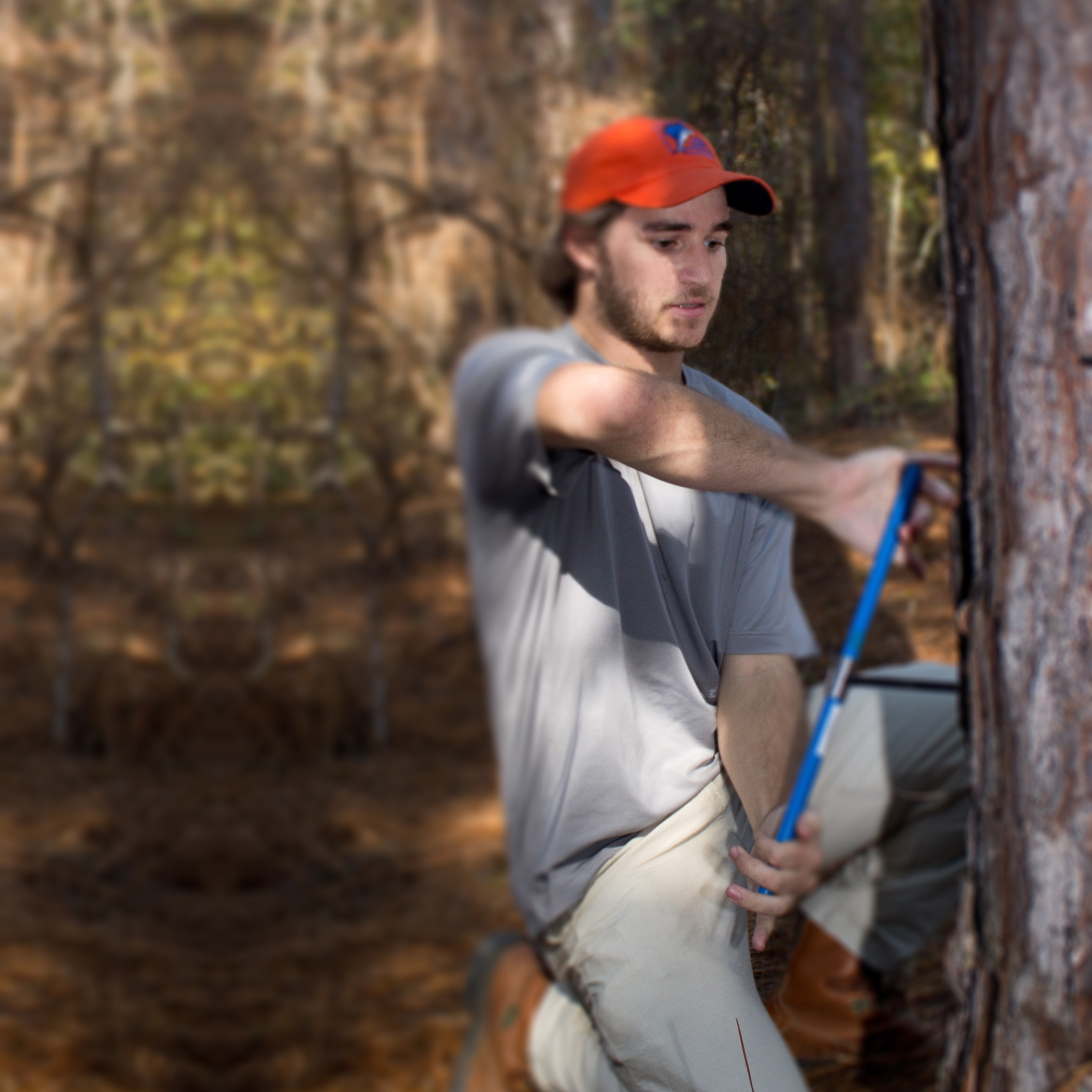 By Sarah Rains
There’s a small space in Clemson’s Experimental Forest where a few tall trees tower towards the sky. Covered in long pine needles, the wooded area is open and bright compared to the rest of the forest. A Creative Inquiry team, led by Dr. G. Geoff Wang and Dr. Arvind Bhuta in the School of Agricultural, Forest, and Environmental Sciences, is studying three species of southern-yellow or heart pines (Pinus taeda, Pinus palustris and Pinus elliotti).

These pines are of interest because of the unusual occurrence they have in this region; these longleaf pines (Pinus palustris) are outside of their natural range, which ends sixty miles south of Clemson in southern McCormick and Greenwood Counties, South Carolina. According to historical records, the plot being studied was planted in the 1940s as a source of labor in the aftermath of the Great Depression. Wang, professor of silviculture and ecology, says that there is quite a history of these trees in the South as far back as the 1930s.

“At that time, people didn’t actually study a lot about it,” Wang said. “It was more like, ‘Hey! We got seedlings here! Go plant them!’ It could be they had excessive labor, and they just had seedlings and went planting everywhere.”

One significant characteristic of longleaf pines is that they depend on fire. Without periodic burning, the plant cannot naturally regenerate. Natural and human-caused fire used to occur frequently, but human efforts to suppress fire and the overharvesting of longleaf pine forests in the southeast have caused populations to decline.

Junior forest research management major Carson Barefoot is concerned about this change. “It’s weird because longleaf pines used to be really dominant. They were the most abundant species but then, we stopped putting fire on the ground, and then they started declining,” he said. “And now, we’ve reintroduced fire. And that’s what we’re trying to see—how the reintroduction of fire is impacting these trees.”

Bhuta describes the magnitude of the decline of this species: “Due to the overharvesting of longleaf pine forest and the practice of preventing fires, the longleaf pine declined, going from over 91 million acres to only over 2.7 million acres,” he said.

The team is also studying how climate affects the growth of loblolly, longleaf and slash pines in different regions of South Carolina. They are starting by studying young longleaf seedlings.

Students measure the height and diameter of the tree, and the canopy. Students also “core,” or retrieve samples from the inside of the trees. Using a core sample, the team can identify the age of the tree and how both climate and disturbance have affected its growth. They can also recognize scars from burning.

“We just want to have some simple metrics to calculate how many trees per acre are here and go from there to kind of give us an estimate of what’s going on with the life history of the tree,” Bhuta said.

This Creative Inquiry engages forestry students in meaningful research in Clemson’s Experimental Forest.
“It’s real world stuff that we would do in a job. So, we get to practice. I like to see how the environment impacts the growth directly in the rings,” junior resource management major Michael Griffo said.

Barefoot enjoys the outdoors aspect and research rewards of this project.

”I want to keep doing research,” he said. “I want to keep coming out here and helping the trees other than exploiting them for their resources. I absolutely enjoy it.”

Reviving a Tradition
Scroll to top