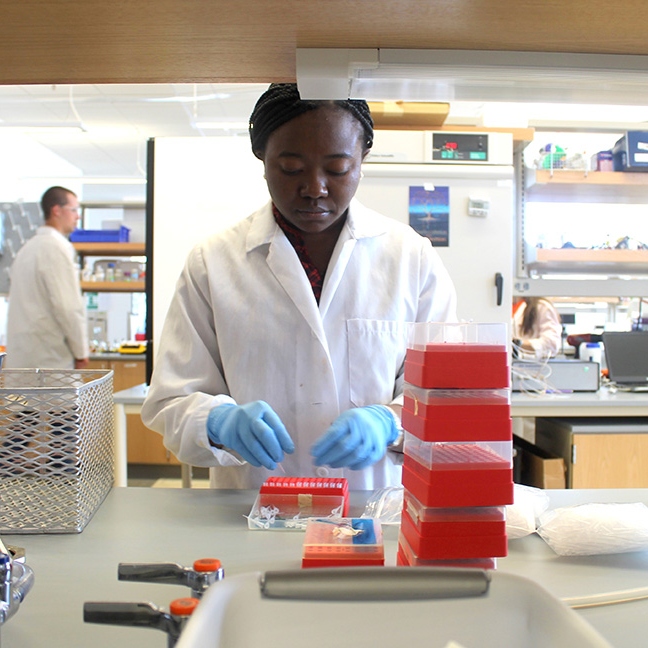 By Noah Wisch and Colby Lanham
When someone first thinks about bacteria and fungi, they don’t often consider them as resources to produce fuels from things such as plants. Dr. Michael Henson in the Department of Biological Sciences and his Creative Inquiry students are conducting research in order to one day build bio-refineries that can produce fuel from bacteria and fungi. These refineries employ a series of chemical and physical reactions to convert plant material to produce various products, including fuels. Biofuels are fuels that originate from living organisms.

Henson began this project when he was in graduate school by converting biomass materials into methane, a component of natural gas. Years later, Henson put together a Creative Inquiry, called Biofuels to Biomass, that involves undergraduate and graduate students working on a project that combines basic and applied science. Students in this CI learn more about their chosen field through first-hand experiences and research opportunities. Henson knows that this experience is valuable.
“It is no longer just studying a textbook or copying a lab procedure,” he said. “The student begins to build on these methods and goes into a lab and can see their project and do the work and see their own results.”

The students are now studying the roles of specific bacteria and fungi in the conversion of biomass
materials, such as cellulose, into biofuels.

“One part of this research project is to optimize the conditions in the way we mix bacteria, which include temperature, different pH and different nutrient requirements,” Abhiney Jain, a microbioogy graduate student, said. “The second part of this project is to understand the relationship between bacteria and fungi as they deconstruct these plant polymers.”

One of the biggest things sophomore biological sciences major Tabitha Banks has gained from the project is the ability to problem-solve.

“I’ve gotten a new outlook on problem solving. When something goes wrong, you don’t necessarily know why it has gone wrong, so it’s looking at here’s what we did, here are the options we can do and it really makes you think,” Banks said. “You may not know what’s going wrong, so it requires you to think outside the box, which will definitely be helpful in future endeavors.”

Banks also reiterated the benefits of working in a lab outside of her regular lab classes.

“I really enjoyed being able to work in a lab because it gives you an insight into many things that you don’t get to do in labs for classes,” she said. “When you go into labs for classes, it’s generally all laid out for you there, step by step, but in here you have the large scale goal for the lab and for the project, but then it’s left up to you.”

Overall, Henson is pleased with the progress made by his students and the time they spend in the lab, learning valuable skills that will inevitably help them further down the road in their careers.

“It is seeing the undergraduate student who has little to no experience in the lab have that discovery moment when they see something they’re discovered for the first time,” Henson said.