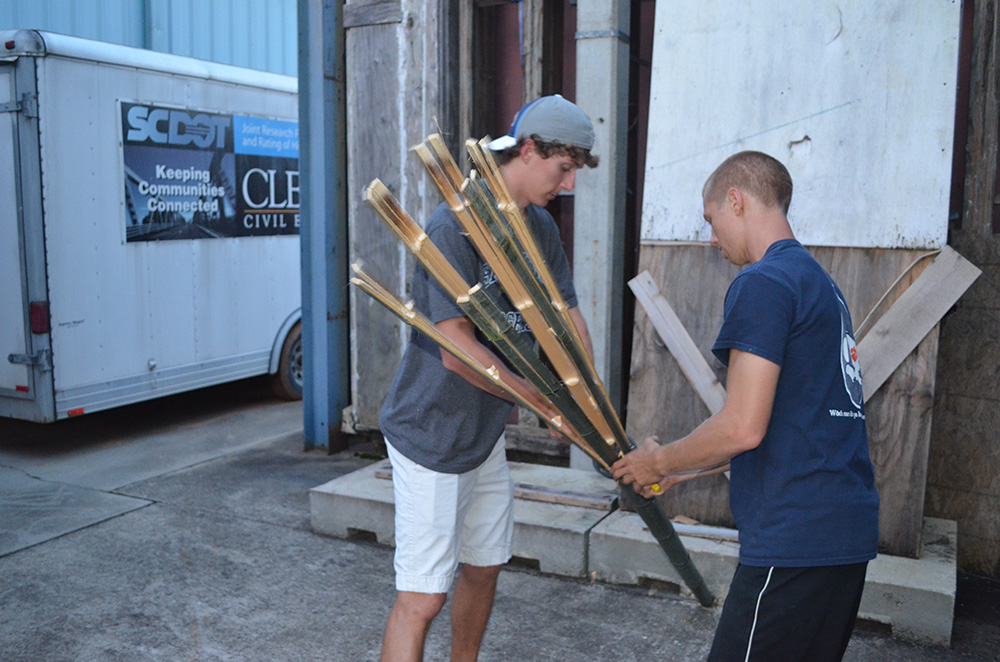 By Sarah Rains
Nearly four years have passed since the earthquake in Haiti. The country of Haiti, though progressing forward in reconstruction, is nowhere near operating at the same speed it was before the 2010 destruction. A group of civil engineering students at Clemson University are developing a way to help restore Haiti. By researching the use of bamboo reinforced concrete, they hope to provide an economical and efficient way for Haitians to rebuild and recover.

Bamboo is about one-third the strength of steel Although not quite as strong, it is far less expensive and much easier to produce.

“We look into bamboo reinforced concrete because we know that bamboo can be grown in Haiti—it can be grown in just a couple months to get to its full height. It’s basically free and grows almost like weeds,” Dr. Weichiang Pang, assistant professor of Civil Engineering, explained.

Pang holds up a piece of bamboo about a foot long and around a half-inch thick. “This can hold around 1000 pounds of force.”

Assessments to test the strength of bamboo include putting a small sliver of bamboo in a machine that continuously pulls at the specimen.

“We test it in the frame there for tension capacity,” Pang said. “So, basically you will pull it apart and we see how much load it will take to break it. Based on that we can see the cross-section and calculate how much pressure it takes to break it. That’s how we’ve found that it is one-third of steel.”

Graduate student Nathan Schneider, pursuing his degree in Civil Engineering, points out the major breaking point of a bamboo.

“Most likely it’s going to break at the node. The bamboo is divided by the diaphragms so, that’s kind of where you can see the fibers are a lot more chaotic, the way they form. That’s generally the weaker part of the bamboo,” Schneider said. At around 1600 pounds of pressure, the bamboo will finally break.

“Well, if you’re falling off a cliff and you see if a piece of bamboo, it’s a safe move to grab it,” Pang said. Because of bamboo’s impressive strength, this Creative Inquiry team is experimenting with how to successfully strengthen concrete structures with the bamboo as that reinforcement.

“The other task we are doing right now is looking at the bonding between concrete and bamboo,” Pang said. “Bamboo is like wood, so it will absorb moisture. So, one thing we need to address is how to prevent it from absorbing moisture when we cast concrete.”

The team is also testing different lengths of bamboo in conjunction with different waterproofing techniques to ensure that the bamboo will be adhesive when cast to concrete. In working with bamboo-reinforced columns, students have created a new technique to bend bamboo.

“We just have a big PVC pipe that we hook up to a steam box and hook it up with a hose,” senior civil engineering major Austin Chalker explained. “It’s almost like a sauna that we can put up to fifteen pieces of bamboo into. It becomes flexible enough where you can bend and touch it side-to-side and turn into a complete circle. Then, we have a form that we just put up to nine at a time in and let it dry for thirty minutes, and it stays in that shape we formed.”

Schneider believes that this part of their research has been very distinctive. “Nobody’s done that before. So, that’s something that we haven’t found any other information about other people ever using,” said Schnider. “That’s been really kind of unique part to this research.”
Pang’s team is also excited to transfer their research into hands-on activities. “Last semester was more research based while this semester’s been cool transitioning into actually putting it together,” Corey Crowder, a civil engineer senior, said. “It’s definitely been a lot of fun. Especially seeing it all come together,” Schneider added.

Once the bamboo-reinforced concrete structures have been tested, the team hopes to travel to Haiti to introduce this idea to the population. Teaching Haitians how to rebuild their structures with bamboo reinforced concrete is now a feasible goal, and this team of students is determined to get there.