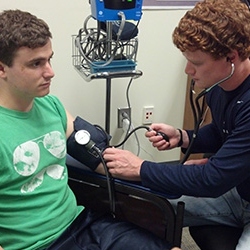 Lub-dub, lub-dub, lub-dub. The heart of a participant beats as Dr. Jim McCubbin’s students listen through a stethoscope for the faint whoosh that indicates systolic blood pressure, with an eye on the blood pressure gauge and a cuff on the subject’s arm. The undergraduates on this Creative Inquiry team are manually assessing blood pressure to study the effects of cardiovascular activity on emotional perception.

Dr. McCubbin, a professor in Clemson’s Department of Psychology, has been studying for years how the cardiovascular system relates to a person’s response to stressful or emotional stimuli. He and his colleagues have found that blood pressure is not only involved in physical health, but may also be related to a phenomenon known as “emotional dampening.” The higher your resting blood pressure, the more difficulty you may have identifying others’ emotions – from the angry squint of a coworker to the joyful smile of a loved one. His most recent publication in Psychosomatic Medicine has gone viral with the news media, and was even used as a joke in Saturday Night Live’s “Weekend Update.”

Recently, Dr. McCubbin’s team of eight undergraduates has extended emotional dampening research to the realm of risk perception. The rationale is this: if you cannot detect the degree of others’ emotions, you also might not detect your own degree of risk in a given situation. For example, you might be more likely to take chances, blowing your entire paycheck betting at the racetrack or spending the weekend binge drinking. So far, the students have found that blood pressure is indeed significantly related to perceived benefits of taking risks. In another study, the team is investigating whether or not emotional dampening extends to self-expression in individuals with elevated blood pressure. Participants are asked to write about an emotional topic, and their personal stories will be analyzed with linguistic software to detect any emotional differences in expression.

The Creative Inquiry team is now starting to take a clinical approach to this phenomenon, extending their work to children with Autism Spectrum Disorder. Even though autistic children do not necessarily have high blood pressure, they generally have a problem recognizing emotions in faces, a major impediment to their social development. The team is in the process of developing a game to help improve emotional recognition. Eventually, the team hopes to test it with autistic students at a school in South Carolina for children with social and developmental disabilities.

The team members are truly excited about the groundbreaking research. In the past, previous students have presented research all across the country, from Portland, Oregon, to San Antonio, Texas. One recent study has been submitted for presentation at the Society for Behavioral Medicine’s 2012 annual conference in New Orleans, Louisiana. Students from the team travelled there in April to present the research, alongside graduate students and medical professionals. According to Jack Graham, a junior psychology major on the team, “the future is only brighter as we continue exploring emotional dampening and piloting new projects concerning [therapies] for those with deficits in emotional recognition.”

Analyzing data and developing projects may be a challenge, but the students have avidly taken it on – without any rise in their blood pressure!

Matters of the Heart: They Don’t Miss a Beat
Scroll to top