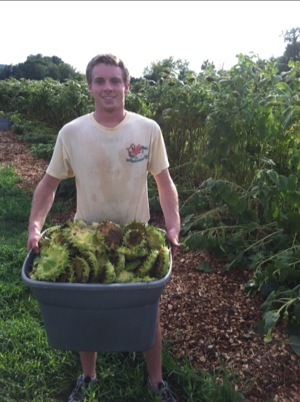 What if you learned we only had 30 years left of oil reserves and less than 80 years worth of Uranium? Obviously you would want to find an alternative, especially using resources you already have. Dr. Terry Walker, Robert Clark, Charles Thornton, and their Creative Inquiry team have begun to seek such a product to offset these diminishing fuel sources. The team is developing a system to reuse vegetable oil to create biodiesel, but they’re investigating other methods to produce energy and cut down on waste. With unpredictable gas prices, most would welcome alternative fuels with open arms.

The oil from the grease trap at your local McDonald’s may not seem valuable, but the team is transforming it into ready-to-go fuel. Their Mobile Biodiesel Production Lab (MBPL) converts and purifies vegetable oil into biodiesel and glycerin. Dr. Walker, from the Department of Environmental Engineering and Earth Sciences, uses a lab that runs on 100% biodiesel and is completely off the grid. Clemson’s campus produces 5,000 gallons of waste vegetable oil annually, and since the team’s process produces a gallon of biodiesel for every gallon of vegetable oil, that’s 5,000 gallons of gas made every year from waste! This biodiesel is currently being used in campus vehicles like trucks, tractors, garbage vehicles, and perhaps even buses in the near future. The MBPL creates 20% of the fuel campus vehicles use, and the team’s goal is to reach 10,000 gallons, or 50% of Clemson’s diesel needs, by the end of 2012.

Since the summer of 2011, the Creative Inquiry team has approached local businesses and restaurants, including favorites like Brioso and Croc’s, as sources for used vegetable oil.

This green energy and biodiesel project has several associated Creative Inquiry projects seeking to increase sustainability and reduce waste. The “Biosystems Engineering: Creating Value Added Co-products from Biofuel Waste Products” looks for uses of glycerin, a byproduct of biodiesel purification. This semester the team is focusing on cleaning products like soap or detergent. About 20 gallons of glycerin is generated every week from Clemson’s biodiesel production. This past fall the research team has experimented with different mixtures for bars of soap. Initial attempts included adding pumice or seed hulls as an abrasive. The latest iteration uses a mixture of the glycerin and white clay, resembling a hardened piece of cornbread. Research associate and biodiesel guru David Thornton says their goal is to make it less crumbly and add an appealing fragrance – for the moment, the soap smells like cooking oil. To deal with the large quantities of glycerol generated, though, the team is trying to figure out how to make a liquid detergent that can be used in Clemson’s dining halls for everyday mopping. This creates a useful product made from their own cooking oil, and could save on cleaning material costs.

This Creative Inquiry team still has more ideas cooking up in their frying pan. Dr. Walker and students are also looking into algae to produce fuel. The growing algae feed off the CO2 generated by the engine that purifies the oil, making the biodiesel purification process even more environmentally friendly. The team will then process the algae into oil, which will go on to become even more biodiesel. Algae are also a high quality source of protein that can be used for animal feed. Another idea that the team would like to explore is feeding biodiesel waste products to black soldier fly larvae. “They harvest themselves,” Thornton explains, as the larvae will eventually become pupae that can be rendered back into biodiesel production or as protein pellets for livestock feed. A square foot of fly larvae will consume three pounds of food waste. When it’s time to pupate, the larvae are trained to move through channels and fall into a bucket. The pupae can be processed to produce both oil and a protein meal that can be used in composting and as feed.

This Creative Inquiry team is the driving force behind Reduce, Reuse, Recycle. They bring biodiesel to Clemson University’s utility vehicles with little to no harm to the environment. Thomas Green Clemson would be proud.

Learn more about their work at: clemsonbiofuels.wordpress.com or on facebook.